Chants demanding a £10 an hour minimum wage rang out through Wakefield city centre on 14 April.

Thousands of teachers marched through London on 23 March against Tory plans to force all schools to become academies. Thousands more marched in other cities across the country, writes Paul Callanan Socialist Party London.

We demand a real living wage

Some workers will be excited for a pay rise in April as the National 'Living' Wage comes into force. But is it really a great deal for workers? Or is it fool's gold?

On April Fools' Day the Tories will implement the sick joke of a National 'Living' Wage of £7.20 an hour

A change to law in New Zealand has outlawed zero-hour contracts.

On Saturday students will take to the streets in Leeds

Tory treasury minister Matt Hancock (right) said under-25s are not "productive" enough to deserve the minimum wage. The government's new 'national living wage' - which is not actually a living wage - is only for workers over 25. 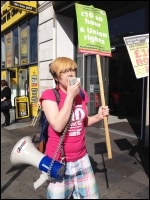 London: "Tory scum, here we come". This chant, which echoed through Westminster's streets on 27 May, was a declaration of war

Determination to fight back on a new scale

Tories threaten young people's welfare, housing and education: Sitting in my first A-level economics lesson a year before US bank Lehman Brothers declared bankruptcy my teacher said: "before you finish this course the economy will have crashed"