Link to this page: https://www.socialistparty.org.uk/articles/9563 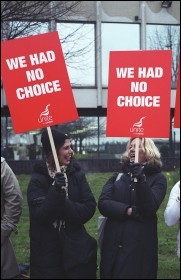 The defeat of Willie Walsh and the brutish British Airways (BA) management is the most important aspect to this dispute.

It is therefore unfortunate that the reported decision of the Socialist Workers Party (SWP) members at the end of the Right to Work Conference to invade talks between British Airways management and Unite has partially obscured this issue.

This occupation was completely mistaken.

Whatever the nature of the deal being negotiated it is not for a group like the SWP to decide to break up talks.

A decision to accept or reject a deal is solely the property of cabin crew and their democratically elected representatives.

In an industrial dispute the final decision on tactics to confront the employer must always rest with the strikers themselves.

Socialists can assist by sharing experiences and ideas in past disputes and building support and solidarity for the strike among the general public.

This has always been the method of the Socialist Party. We will offer our opinion on the course of a dispute to workers but we believe that any initiative taken in support of a dispute should be taken in consultation with the workers themselves.

A key task for socialists and trade union activists is to raise the confidence of workers to fight not to substitute themselves for workers in struggle.

This will mistakenly create the impression that a special minority of activists will do the fighting leaving workers as bystanders.

The Socialist Party stands for the maximum control of workers over their dispute.

It is the view of the Socialist Party that the actions of the SWP on Saturday was not in the best interests of striking cabin crew workers.

Such tactics will prove to be counter-productive. It is the mass action of cabin crew through their union that is the key to defeating Walsh, not the actions of a self appointed minority.

Despite this we are totally opposed to any victimisation of those who mistakenly took part in this protest.

The priority for all workers in the trade union movement now is to support the cabin crew workers against Walsh and BA management.