For councils that fight the cuts!

There is an alternative - socialism! 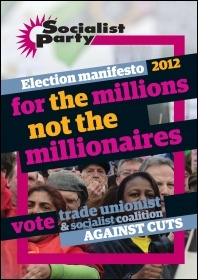 The latest fashion among all the parties in Westminster is to steal the Socialist Party's slogan and claim they are introducing policies that help 'the millions not the millionaires'.

Nothing could be further from the truth! The latest ConDem budget piled yet more misery on the millions in Britain, while offering further tax cuts for the millionaires and the big corporations.

The cut in the 50p tax rate has saved 14,000 millionaires £40,000 each. Their numbers include David Cameron and other members of the cabinet! If you are a millionaire the government believes you need to be encouraged with incentives, anyone else needs to be punished with pay freezes, cuts in public services and benefits.

New Labour rightly attacked the government for producing a budget 'by the rich for the rich'. Unfortunately, New Labour's policies are not fundamentally different to those of the government parties.

New Labour says it will not reverse the vast majority of the cuts implemented by the ConDems and will maintain the public sector pay freeze and cutting of public sector pensions. 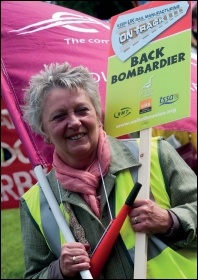 It is happy to promise to maintain this government's misery for the millions, but refuses point blank to promise to restore the 50p tax rate on income over £150,000.

And at local level every single Labour council has so far done the government's bidding and implemented vicious cuts in public spending.

There is therefore an urgent need for a party that stands in the interests of the majority - that really does stand for the millions not the millionaires.

In 2011 millions of trade unionists took action against the government's cuts, particularly in defence of their pensions.

Over the coming year an escalation of the action will clearly be necessary; terrible as the cuts we've suffered so far they represent less than 10% of the cuts the government is planning.

Demonstrations, strikes and occupations are an essential part of the fight against the cuts, but it is also necessary to have an electoral alternative that is genuinely anti-cuts.

This question is increasingly being discussed in the Labour affiliated trade unions. At GMB conference this year a quarter of the motions are questioning why the union is continuing to use members' money to fund New Labour.

We argue for all the trade unions to stop funding Labour and to begin to build a party that genuinely stands in their interests.

We support all steps towards such a party. That is one reason the Socialist Party takes part in the Trade Unionists and Socialist Coalition (TUSC) which will be standing as many anti-cuts candidates as possible in the forthcoming elections.

All TUSC local authority candidates sign up to a simple five point pledge: