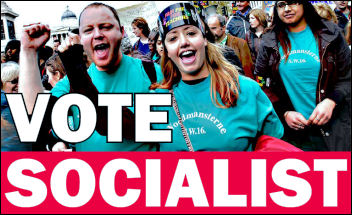 Fed up with New Labour, LibDems and Tories...

We are living through the most severe economic crisis since the Great Depression. Although the economy, which shrunk by a massive 5% has now stuttered into growth, a further decline - a 'double dip' - is far from ruled out.

So the 2010 general election comes at a decisive time. The British economy is still deep in crisis... who do New Labour, the Conservatives and the Liberal Democrats expect to pay for it?

Not the bankers! £1.2 trillion has been thrown at the banks, ringing up a colossal national debt. This has been greedily swallowed up and £6 billion was paid back out in Christmas bonuses alone!

Not big business fat cats! Despite massive lay-offs and redundancies many multinationals have continued to make record-breaking profits. Tesco boasted over £3 billion profit during the depths of the recession last year.

Not the top politicians! Tory Lord Ashcroft has millions stashed away in tax havens so barely pays any tax. MPs implored the rest of us to 'tighten our belts' after voting themselves a pay rise, taking their salary (excluding expenses) to a very comfortable £64,766 a year.

Rather, New Labour, the Conservatives and the Liberal Democrats all agree that working class people should pick up the tab for the bankers' mess.

The 'public sector' is our services - hospitals, schools, council services and the jobs of hardworking public sector workers like nurses, teachers and bin workers. But public sector spending is the target of choice as the politicians try to bring down the huge government debt created by the bank bailouts and effects of the recession.

Working class people are viewed with such contempt that the establishment parties openly compete over who can promise the most severe cuts. Labour chancellor Alistair Darling has boasted that cuts will be 'deeper and tougher' than Thatcher's. The Conservatives say they will cut 'faster' than Darling and the Liberal Democrats call for 'savage' cuts.

Many people, particularly older workers, will be sickened at the thought of a Tory government. The memory of Thatcher's onslaught against workers in the 1980s is deeply ingrained. It is understandable that many will feel the need to go out, and through gritted teeth, vote New Labour in an effort to see off the Tories.

But this will not solve the lack of a political voice for working class people. There is no fundamental difference between the attacks that a Tory government will inflict on us and the attacks a New Labour government will make. The 'lesser of two evils' is still 'evil' and we need something far better.

The political system is in crisis. Never have the politicians been so utterly discredited in the eyes of so many millions of people. In the last twelve months alone the MPs' expenses scandal, the Chilcott enquiry and the corporate lobbying scandal have rocked the country. The sheer scale of abuse is unprecedented and seeps from every party. The hypocrisy of Labour's election slogan 'a future fair for all' will be laughable to millions.

Workers and their families, students, pensioners and young people have been disenfranchised. The transformation of Labour into New Labour and its adoption of an exclusively pro-big business, pro-free market and anti-working class agenda explains the plummeting turnout in general elections.

But this is not apathy, this is anger. This is disillusionment. This is an outright rejection by a near majority of 'politics' as something they do to us.

We need a party that stands up for working class people.

Policies: Putting the millions before the billionaires!...