The government hasn't yet clarified how 'passports' would work, but the dangers are apparent.

The ballot for PCS president and NEC opens on 22 April

Images of young people rioting in Belfast and elsewhere, countered by police using water cannon, conjured up scenes from the period of the 'Troubles'

Global media company Forbes recently published its 'World's Billionaires List'. When compared with Unicef's prediction that 140 million children will fall below the poverty line as a result of the

Tory MPs have claimed £3 million in housing rent payments at the same time as voting to effectively cut housing benefit for low-income households in the private rental sector.

This year's elections for the executive of the biggest education union, the NEU, come at an important time for educators.

Vote socialist on 6 May
100,000 nurses could quit the NHS. Yet the government offers only an insulting 1% pay deal. The health unions, supported by the wider trade union movement, must call a national demonstration - to prepare for strike action if necessary. 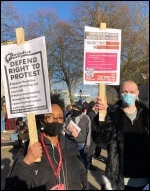 While the Covid pandemic continues to ravage the globe, the capitalist classes are - if anything - even more frightened of what they will face as the virus's grip lessens. The pandemic has revealed the failings of their system to billions of people.

Tory MP Andrea Leadsom announced her 'Start for Life' proposal last week. Her plan to establish a 'new service' for children up to age two is being trumpeted as an innovative service