A socialist response to the Coronavirus crisis

As new coronavirus infections gather pace - in Britain and around the world - Boris Johnson claims the country is "well-prepared with a fantastic NHS." Who's he kidding?

Average wage levels in the UK have, for the first time, recovered to the level they were at before the financial crisis.

The Labour Campaign for Trans Rights has intervened in the party's leadership contest, calling on candidates to back its 12-point pledge 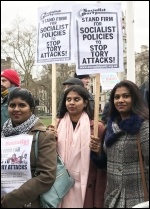 The unions and their members are facing serious challenges - not least a Boris Johnson-led Tory government with a working majority.