The victory of Sharon Graham as general secretary of Unite has struck the labour movement as a thunderbolt. This can be a pivotal moment.

In addressing TUC Congress, Sir Keir Starmer claimed that "Labour will always stand with the unions", standing "shoulder to shoulder" with them over vicious attacks such as 'fire and rehire'. But the reality is very different.

The government doesn't seem to want to budge on removing the £1,000 a year uplift

Social care has been in crisis for decades. Successive governments have deliberately diverted resources from care provision into the pockets of big business through privatisation. Despite the hype, Boris

Staff, school students, and their families understandably want the new academic year to be a return to 'normality' 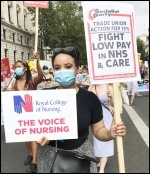