From The Socialist newspaper, 11 November 2010 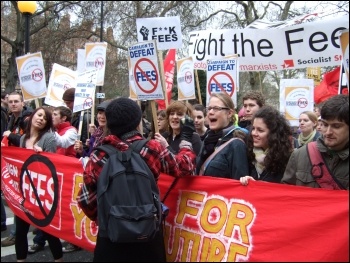 THE GLOVES are off with regards to university fees. The Con-Dem coalition has announced that it intends to triple the cap on fees to £9,000 a year. If their plans are carried out a three-year degree could set students back more than £50,000, including the cost of living.

This is a vicious assault on the right of young people to access education. Hundreds of thousands will face exclusion purely because of a lack of financial means. Those who are lucky enough to be able to attend will find themselves saddled with three decades of crippling debt - almost the equivalent of taking out a mortgage!

If the proposals are allowed to go through, a 'free market' system will run riot in our universities. Even more so than now, institutions in the elite Russell Group will become an exclusive club for rich, ex-private school pupils. Even many with relatively well paid parents in professional work will find £9,000 a year to be beyond their reach.

Some institutions will charge lower fees (still hugely increased from at present), but due to swingeing 80% cuts to the teaching grant, what they can offer students will be unrecognisable as a university education.

As The Socialist warned, the Liberal Democrats have disgracefully and utterly betrayed those who voted for them in the last general election, believing their promise to abolish tuition fees. On paper there are enough MPs who pledged to vote against fees to stop this increase, but only under huge pressure from a mass movement will the MPs be forced to keep their promise, even if it means breaking the coalition. 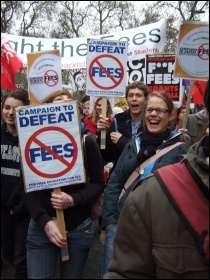 Young people and working people will not simply accept this attack on their right to a decent future. Tens of thousands of students and education workers are expected to march through the streets of London on 10 November.

The 10 November demonstration must be just the start of the fightback. A mass campaign against education cuts and fees organised on every campus and in every college, united on a national level, is needed.

Mass protests and demonstrations, student strikes and occupations, industrial action by education workers and unity with every group of workers fighting cuts, will all be needed in the struggle to defend education.

On 24 November, when fees are next discussed in parliament, Youth Fight for Jobs and Socialist Students are calling for a day of mass demonstrations and student walk-outs to take place throughout the country.

We need to begin organising to build for this day of action immediately. We need to fight to defend every job, course and service, to stop a rise in fees and demand free education. Now is the time to build the campaign - organise to fight for your future!

What the capitalist cuts really mean

London firefighters' dispute: the fight is not over

Massive anger must be organised into coordinated trade union action

Scotland: potential to build a mass movement against cuts

US elections: Bankruptcy of Democrats leads to spectacular fall