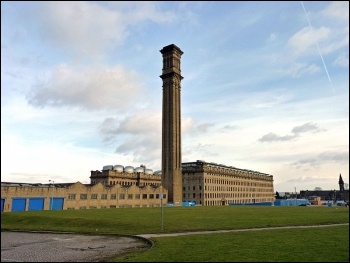 On 27 April 1891, 120 years ago, the great Manningham Mills strike of Bradford textile workers ended after nearly 19 weeks. This war of attrition took place in a period when Bradford's textile industry, like much of British capitalism, was facing decline and greater competition worldwide.

The strike vividly highlighted the clash of interests between capital and labour and showed up the Liberal Party's failure as a vehicle for Britain's working class.

As Manny Dominguez explains, this struggle became a marker for those young socialists emerging in the trade union movement who were searching for a party of labour to represent the interests of the working class.

Manningham Mills, owned by Samuel Lister, was one of the largest factories of its kind in the world. It employed 5,000 workers, the majority women. On 9 December 1890 Lister posted a notice outlining reductions in pay for weavers, pickers, spoolers and winders, hitting 1,100 workers in total. Lister threatened a lock-out if workers did not accept.

Company managing director Jose Reixach blamed deteriorating economic conditions in British and foreign markets for the textile industry's decline. For example, new tariffs had effectively closed US markets to Lister's fabrics. Tariffs or taxes on foreign imports were a form of protectionism, introduced by governments that hoped to lessen the impact of the global economic decline by trying to boost national economies.

Reixach also claimed that, up to then, workers had been paid 'unnaturally high' wages! Lister previously had a virtual monopoly on velvets and plushes. He argued that when Britain dominated the world market in textiles, the employer could afford to pay better wages. However with a much weaker world economy, the employer said, workers must accept more 'realistic' wages. Sound familiar? 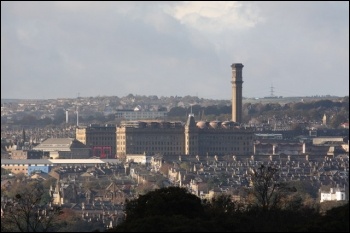 The workers' reaction was predictably hostile. Few were in a union but were prompted to invite regional officials from the Weavers Textile Workers Association to discuss a strategy for action. From the first meeting a Work Peoples' Standing Committee was appointed to negotiate a settlement with the employer.

After negotiations drew a blank, the workers convened again. A third official from the union, Ben Turner, a socialist, compared Manningham workers' wages to other local textile workers - and to company profits. In the previous year, Lister's profits were £138,000. Turner argued that a wage reduction would save them only £7,000 a year or 5%. But if Lister carried out the wage cuts, workers would be 20% worse off.

During meetings with management on 16 December, workers argued that the employers' yearly averages of workers' pay hadn't taken into account earnings lost due to 'broken' or 'waiting time'. Management, however, refused to budge. Despite union officials urging caution, the workers called for strike action.

Workers were ill-prepared for industrial action; they had no strike fund and indeed no formal union branch structure. The striking workers' priority was not only to spread the issues and get support, but also to establish a strike fund.

A manifesto was written. Women, who were most of the strikers, went out with children across northern England and Scotland collecting donations for the strike fund. Processions became a regular Thursday fixture in Bradford. Messages of trade union solidarity came from across the world. Money paid for the strike fund supporting workers and their families and for food and food kitchens but harsh weather made life very hard.

By the end of March 1891, all 5,000 workers were out. The tempo of processions, meetings and demonstrations increased, especially when the dispute spilled onto the political arena. The actions of Bradford council, the police, the Watch Committee (who controlled the police) and Poor Law Guardians further politicised the dispute.

The 1834 Poor Law criminalised the poorest in society. Unemployed people applied for poor relief to the Guardians of the Poor Law. Strikers were denied poor relief if they refused to be blacklegs (scabs) and work at Lister's Mill. The Guardians (ie the council) saw them as undeserving for refusing to work.

The police bussed in scabs and sometimes used unnecessary force against the pickets. When management of the venue where the trade union movement held many meetings told them they could no longer use it, they were furious. The Watch Committee said they could not hold meetings in Bradford unless the unions stopped their regular Sunday meetings.

The Strike Committee opposed this unjust attack on free speech and assembly. On 12 April Bradford Trades Council organised a rally and requested the use of Dockers' Square for an overflow meeting. The Watch Committee refused.

The next day left groups called on people to assert their right to public assembly at that Square. Thousands gathered in the streets and the military were drafted in. The next mass protest meeting on 19 April was peaceful and attended by up to 90,000 people who passed a motion condemning the Watch Committee and demanding the right to assembly in the town centre.

Unfortunately the strike was on the verge of collapse. Financially, the strikers had difficulty in sustaining the dispute even though the number of strikers had increased. The employers would not compromise. Lister rejected the Strike Committee's final offer to submit to arbitration. All this undermined the determination to resist of strikers who were being starved into submission.

Hardship, the threat of bailiffs and evictions and the hostility of Bradford's establishment weakened the strikers' resolve and their unity. On 22 April the spinners, the last department to join the strike, decided to return to work. On 27 April, the rest acknowledged defeat and returned to work.

After the strike a newspaper reported that there were up to 200 'blacklegs'. But that number could only carry out basic maintenance work in the mill, which in full production employed 5,000. Ironically the strike was at a time of general downturn in trade. Over-production may have compelled Lister & Co to at least a partial closure of the mills, so there was no urgency to resume to full production, which finally broke the strike.

The 1890s were a critical time in the development of the working class. Britain's economy had previously dominated world markets. Many workers had shared in this prosperity and working class organisations were dominated by more moderate, often purely craft-based, trade unions and co-operative societies.

After the radical Chartist movement in the 1840s, most leaders of the working class accepted capitalism. They worked to increase their share of the profits by increasing wages, lowering hours and improving working conditions and gave up ideas of changing the system.

These leaders saw the openly capitalist Liberals, worshippers of the free market and free trade, as the party to take workers forward. But by the late 1880s, growing industrial unrest made it clear that the period of liberalism as a mouthpiece for the working class was coming to an end.

Meanwhile, competition from emerging economies such as Germany and the US ensured that Britain would no longer be the 'great workshop' of the world. With rising costs for new machinery and falling prices for goods, industry tried to maintain its profits through cutting workers' share of the wealth by reducing wages, destroying jobs or both.

There was also a new political and industrial direction. The growth of the less craft-dominated 'new unions' was promoted by socialists, who injected a new militancy into the unions. They also questioned the whole social and economic system and criticised both establishment parties. With Friedrich Engels among them, they called for the creation of an independent working class political party.

The Manningham Mills strike reflected the economic and social relationships of the 1890s. The debate over wage rates and averages brought to the surface grievances affecting the whole textile trade such as loss of earnings due to 'broken time' and unhealthy working conditions.

Trade unionism was not strong in the textile areas in 1890. The multiplicity of processes in woollen textiles and in the velvet and plush trade created distinct groups of workers within each factory. Employers could often create divisions and prevent united action. Lister & Co tried this by proposing reductions which would at first only affect one quarter of their employees.

As women were the majority in the workforce, the Manningham Mills strike showed women workers were as militant as their male counterparts. It was an unprecedented display of militancy and unity in an industry where, previously, workers were neither militant nor united. Trade union membership in West Yorkshire rose rapidly.

The strike showed that the wider working class needed greater strength and unity both industrially and politically. A month after the dispute, Bradford Labour Union was formed, and the Independent Labour Party was formed in Bradford in 1893.

Even today, there are many similarities with the political and economic situation of this strike, not least the desperate need to create a new mass workers' party to represent the workers not the bosses.

May day Greetings in The Socialist May 2011

No Health Cuts, No Privatisation