Link to this page: https://www.socialistparty.org.uk/articles/12162 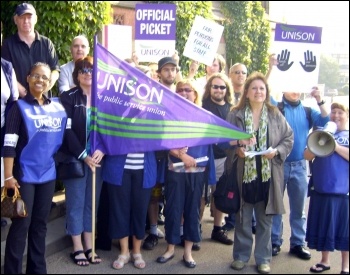 Hundreds of Sheffield University support and ancillary staff, members of Unison and Unite trade unions, took strike action on Friday 3rd June in a battle against the university's plans to slash their pension entitlements.

The strikers are low paid cleaners, porters, secretarial, clerical and admin staff who stand to lose two thirds of their pensions if the university introduces a new scheme to replace the existing final salary pension scheme.

"It will devastate people's pensions and condemn our members to pension poverty".

Around 30 strikers joined early morning picket lines. Staff were indignant that in the 1990s the university took an eight-year pensions 'holiday' whilst staff continued their contributions, and that university vice chancellor Keith Burnett who earns £294,000 a year will continue to benefit from membership of the Universities Superannuation Scheme (USS) and its final salary pension provision.

They were also angry at the hypocrisy of a university that professes an ethos of equality, transparency and fairness but has blatantly disregarded it for their lowest paid staff.

With an 84% vote for action in the ballot, workers will strike again next Friday, 10th June, if management doesn't agree to bring the grades 1-5 into the USS scheme.

This version of this article was first posted on the Socialist Party website on 3 June 2011 and may vary slightly from the version subsequently printed in The Socialist.