From The Socialist newspaper, 8 June 2011 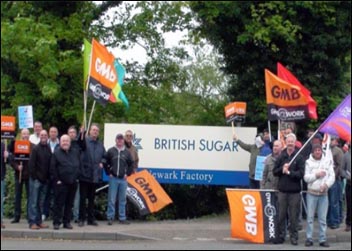 As reported in the previous issue of the Socialist, the heroic struggle for nearly three months by engineering construction workers locked out from the BP Saltend bio-ethanol plant, near Hull, has ended.

400 workers were locked out on 14 March when their contractor, Redhall, was thrown off the job by Vivergo, 40% owned by BP.

This occurred two weeks after these same workers had taken unofficial strike action and blockaded the BP site gates to win a victory, forcing Redhall to abide by the national industry agreement over redundancy procedures. Vivergo claimed that they cancelled Redhall's contract because it was running over time and budget, but made no provision for new contractors to complete the work.

Most workers believe that the lockout was to punish a militant workforce and an opportunity to undermine the national industry agreement (NAECI) two years after the bosses had been defeated in the Lindsey Oil Refinery (LOR) dispute.

The Redhall workers refused to accept the lockout and waged a tremendous fight to try to win back their jobs and protect TUPE (Transfer of Undertakings Protection of Employees) rights. In doing this, they faced financial hardship, BP/Vivergo and Redhall lies, a national media blackout, heavy handed policing and widespread use of Section 14 of the Public Order Act, and the shameful role of sections of the trade union bureaucracy.

In the face of all these obstacles, the workers mounted a campaign of militant action. This included daily mass protests at Saltend, blockades of the gates and an invasion of the site forcing its closure, protests at Vivergo and Redhall offices in Hull and Middlesbrough, and a two hour occupation of the industrial estate roundabout causing a six-mile tail back of traffic into Hull city centre! Two coaches went down to protest at BP's AGM in London, linking up with others protesting against a BP oil spill in the Gulf of Mexico that had devastated the environment.

The high point of the campaign was when 500 construction workers, marching through Hull city centre, were joined by local authority workers, linking up private and public sector workers fighting job losses.

Solidarity strike action was taken by scaffolders and electricians when they were called back to work on the Vivergo site after being laid off on pay. BP repair and maintenance workers also joined the strike action for two weeks until, mistakenly, on the advice of the Unite national trade union official the protests/pickets were temporarily suspended to allow negotiations with Vivergo, with the promise of an emergency national stewards forum to hear the locked-out workers.

When this meeting was finally held, it unanimously supported the call for a national day of action. But 12 days later on 9 May, with the union bureaucracy pushing the 'cash for jobs' deal, the National Engineering Construction Committee (NECC) shop stewards forum voted 27-12 against calling national strike action.

Yet, in the early stages, Redhall workers did send pickets with leaflets to other sites in the north of England to try to spread the strike action. Some sites sent delegations to Saltend to show support and some sites collected levies. However, the national strike action needed to win the dispute never developed.

Despite their heroic stance, the locked-out workers have not won their jobs back. The NECC decision on 9 May to not call industry-wide industrial action was a crucial turning-point in this dispute.

Workers still refused to accept a financial settlement with onerous conditions and continued their protests. A hardcore of protesters forced Vivergo, who initially refused any responsibility for the locked-out workers, to increase the money - to a reported £1.6 million - and drop most of the strings.

Whilst most workers have now understandably taken the money a few, including Socialist Party and lockout committee member Keith Gibson, have refused to take any pay-off from Redhall or Vivergo and will pursue legal claims against these companies.

These will be important test cases. What BP/Vivergo have done at Saltend could set a dangerous precedent.

However, many workers have asked why strike action did not spread through the industry like it had done two years ago in support of the LOR construction workers. There are three main reasons for this:

The first 2009 LOR strike was sparked by the employers' use of cheap, non-union foreign labour, an issue that had been brewing in the industry for several years.

So when the national media gave widespread coverage to what they wrongly called "the British jobs for British workers strike", unofficial strike action spread rapidly to 20-30 sites around the country against an undermining of trade union rights.

Whereas there was a national media black-out about the Saltend lockout and a lot of confusion about the issues at stake. Two months into the dispute, some delegates at the national stewards forum claimed not to even know about it!

The LOR strikes began with walkouts without any ballots taking place, illegal under the anti-trade union laws. As such they were unofficial strikes and while trade union officials did still play a role, they could not exercise that much influence. At Saltend, both the GMB and Unite eventually declared the lockout an official dispute, which meant the national and area officials had far more control from the start. This control was used to try to stop the strike spreading, because it would have been illegal secondary action.

The Saltend dispute occurred two years further into the recession than LOR. The worry of workers about losing jobs was much greater than at LOR. The recession has hit the construction industry hard.

The fear amongst other workers at Saltend and on other sites was that if they took solidarity action, they would be sacked as well.

The concern about sackings affected other Redhall workers who on more than one occasion refrained from picketing outside other sites because they did not want to put others' jobs in jeopardy.

Unfortunately there was not the confidence among even the best union officials and many of the shop, stewards that national strike action could be built.

Socialist Party member Keith Gibson, who had played a leading role in the victorious LOR strikes, was elected onto the Saltend lockout committee and became its main lay spokesperson. From day one Keith argued that the lockout was an attack on the national agreement and that to win their jobs back, the dispute needed to be escalated to national strike action.

Keith and the Socialist Party were attacked in the first weeks of the dispute by some of the trade union officials. But, by having a clear strategy and carrying out the members' mandate, Keith's standing increased as the dispute went on. As at LOR, Socialist Party leaflets were distributed by protesting pickets at Saltend and taken to other sites.

Whilst the GMB officials lacked confidence that the dispute could be escalated, unfortunately the Unite bureaucracy actively worked against spreading any action, always trying to get a 'cash for jobs' settlement to call the dispute off. The Unite national secretary of the NECC national stewards forum, Bernard McAuley, got the nickname "Bernard McCall it off" for the role he played in undermining the dispute.

Mandated by the Redhall workers to call for a rolling programme of national strike action, Keith Gibson described this forum meeting: "It felt like it was a set up. From the minute I entered the meeting room, not one person came up to speak to me."

Using the fears over construction jobs, a Unite shop steward on the lockout committee, who was also mandated to call for national strike action, spoke on behalf of himself and against the strike mandate of his members! The locked-out workers are understandably critical of Unite's role, and would have expected better of the union under the leadership of general secretary Len McCluskey.

In contrast to the role of some trade union officials, the Redhall workers held daily car park meetings at Saltend at which all the issues were debated. The Teesside lads travelled down to Hull whenever there was a mass meeting to vote on any offers or deals, a genuine example of real workers' democracy.

The Redhall lockout represents a serious defeat for engineering construction workers. To stop other employers using mass sackings to get round NAECI and TUPE, rank and file trade union organisation will have to be rebuilt on the sites and a network of fighting stewards and reps developed that can overcome the block of the trade union bureaucracy and build the sort of industrial action that will be needed to fight off further attacks.

In Keith Gibson's words: "Every struggle, including this lockout, throws up its leaders and during the course of that struggle each leader's tenacity is tried and tested. Throughout the course of this struggle a whole bureaucratic layer were found wanting and exposed. Workers have marked down their conscious undermining of the dispute and in some cases their utter treachery.

"The lesson of this dispute is clear - everyone from the shop floor upwards, including shop stewards, should be freshly elected onto any future disputes committees, with an immediate right of recall if they refuse to carry out the fighting mandate of the workers they represent."

Economic crisis in 'them and us' Britain

Cuts in jobs and services: We are fighting back!

Birmingham: city of a thousand cuts

Mood for action among Unison members in Waltham Forest

Sylvia Pankhurst: Everything is possible

Protests grow as young people say: 'We want a future!'