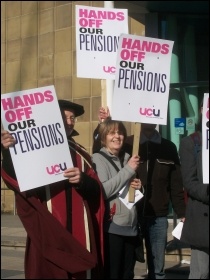 As the Socialist goes to press 750,000 public sector workers are gearing up for coordinated strike action on 30 June. As they defend themselves against the vicious and needless attacks on their pensions, trade unionists are finding out who is on their side and who is against them.

Speaking after the 27 June meeting with ministers, PCS civil service union general secretary Mark Serwotka said: "Again the government has shown no interest in actually negotiating on any of the key principles at the heart of this dispute. We did not ask for pensions to be cut, we did not ask for public servants to be told they must work years longer and pay more for much less in retirement.

"And this is a dispute that is entirely of the government's making... Every independent analysis shows that public sector pensions are affordable now and in the future, and costs are falling in the long term."

Tory education minister Michael Gove is even proposing that parents take part in strike-breaking by turning up to run classes as teachers in the ATL and NUT strike on 30 June. However, so far over 94% of voters clicked 'no' in the Guardian's online straw poll: "Will you volunteer to keep schools open during this week's strike?" and the head teachers' union has warned against Gove's scabby suggestion.

But the architect of these enormous attacks on pensions across the public sector is former New Labour minister John Hutton. Now we hear Labour leader Ed Miliband calling on the NUT, UCU, ATL and PCS trade unions not to strike on 30 June. In a Guardian interview Miliband said that the strikes were a "mistake".

But even Dave Prentis, general secretary of Unison, a right wing trade union leader, talked about the biggest campaign of industrial action since the 1926 general strike and was critical of Labour at his union's recent conference. Prentis's seeming sudden about-turn is a reflection of the pressure on him from Unison members facing massive attacks and seeing other public sector workers voting to strike.

Prentis appeared to call for branches to build for strike action in the autumn but his preference was for 'regional' rather than national action despite the fighting talk he made to the press prior to the conference.

The Socialist Party believes that national action, alongside other public sector unions, is essential. Local action should also be sanctioned where requested but coordinated simultaneous national action will have the greatest impact.

The Unison conference acknowledged branches who were currently taking action, such as in Southampton and Barnet, adding up to 34,000 members being balloted for action. Many Unison members are angry that, while facing the same cuts and attacks, they are not able to join fellow trade unionists in action on 30 June.

Any further delay in taking action will have consequences. Tragically a significant number of conference delegates explained that they would not be returning next year as they were losing their jobs.

But following the latest pension talks, with the delegates back home for another 12 months and with four public sector unions preparing to take action, it appears that Prentis is backing away from his pre-conference fighting talk.

Cabinet Office minister Francis Maude has been a key attack-dog of the coalition government in these negotiations. Incidentally it should not be forgotten that he was exposed in the MPs' expenses scandal for claiming £35,000 in two years for mortgage interest payments on a London flat - complete with 24-hour concierge and gym - when he owned a house one minute's walk away.

Following the 27 June talks with trade unions Maude said: "While the talks are ongoing it is obviously disappointing that some unions have decided on industrial action... We recognise that the funding basis for the local government pension scheme is different... On that basis, we have agreed to have a more in-depth discussion with local government unions and the TUC about how we take these factors into account." This is a further attempt to peel so-called 'moderate' unions away from those taking action now. Ministers hope they can divide the unions, with the likes of Unison and the GMB withholding ballots on the weak promise of more talks.

Prentis commented that: "there was a sense that today we were in real negotiations!" Giving credibility to the Con-Dems and accepting more talks rather than naming a day for a ballot was not the mood at Unison conference. Mark Serwotka, on the other hand, described the talks as a "farce". Unison members must campaign for their leadership to act.

The strikes, rallies and demonstrations on 30 June will bring the UK closer to the strikes and protests in Greece and Spain. But if there is no backing down by this government then all public sector unions should come together to plan further action.

The recent RMT victory against London Underground's campaign of trade union victimisation provides many lessons, including that bullying management only listens when faced with serious and determined action.

Prentis should act on the mood at Unison conference to name a day for a ballot of Unison members. This is a battle to defend the gains that workers have won over decades, not just our public services but also the rights of the unions to recruit, organise and fight for their members.

Few will be surprised to hear that the Con-Dems want to make it harder for workers to take strike action by raising the legal threshold for the turnout in strike ballots, while maintaining the legislation that undermines the ballot process.

What is more, the Con-Dems also want to withdraw facility time for reps and stewards in the public sector. This is an attempt to seriously hamper the functioning of the unions. In fact some local councils and hospitals have already taken facility time away from some activists.

But the coalition is weak and can be forced into u-turns. However, to defeat it will require a united and determined campaign of anti-cuts activists, young people and service users with coordinated trade union action at its heart. A 24-hour public sector general strike must be called as the next step in this battle. The National Shop Stewards Network lobby of the TUC in London on 11 September will be an important rallying point for all those who want to pressurise the leadership to act.

In the late 1980s Thatcher made the mistake of attacking the entire working class through the unfair poll tax. The Con-Dems, attempting to imitate her ruthlessness, have made a similar mistake by hitting all four million public sector trade unionists at once. A mass struggle, democratically organised, with a socialist leadership, mobilised millions against the poll tax, making it unworkable and Thatcher unelectable. Let's do it again!