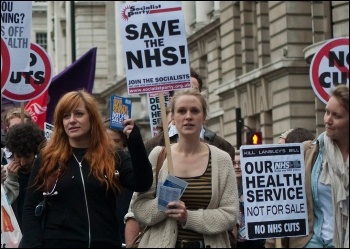 A public meeting was held in Leicester recently as one of many 'consultations' on changes to children's congenital heart services in England.

As a result of assessments by Sir Ian Kennedy, also the chair of the watchdog on MPs' expenses, a steering group called 'Safe and Sustainable' was set up. They agreed that the current eleven congenital heart centres should be cut down to around six or seven.

Documents spelling out the changes were given to people at the meeting which was made up of parents, patients, surgeons and other NHS staff.

The first page stated that the changes were "not inspired by any motivation to save money". However, the rest of the document didn't provide any positive reason for why these changes should be made.

While stating that bigger teams of surgeons are needed because they provide better clinical outcomes and that smaller centres are 'vulnerable to sudden and unplanned closures' (presumably as a result of funding cuts!) the document claims that hiring more surgeons is not the answer!

This is because, according to 'Safe and Sustainable', they will be performing fewer surgeries and this will 'increase the risk of occasional surgical practice'.

Four options have been presented about which centres should remain open. This is portrayed as if it is providing choice.

In reality, it means that in each area, groups are campaigning to keep their local centre open while coming up with reasons for why others should close.

For Leicester, it is only 'Option A' that contains our local centre at Glenfield Hospital. Therefore, Heartlink, a charity representing parents of patients, has launched a campaign for Option A. Local Lib Dem and Labour MPs have got on board with this campaign, arguing that is the most affordable and the best for the country.

It will mean that centres will be closed in Southampton, Leeds, Oxford and London. In fact, Oxford isn't in any of the options. Described as an "outlier in quality", it does not perform the 400 surgeries a year that the review recommends.

In deciding which centres had the most 'points' and were therefore the most important to remain open, there were scores given to each aspect of the centres. Quality was given the highest weight in points whilst travel and access was given the lowest.

But as one parent at the consultation said, parents would "travel to the moon to save their children" but if safety and quality were guaranteed, the most important aspect would be how easy it was to get there.

Parents were concerned that if the centre in Leicester closes down, it could take them hours to travel to their nearest centre which, in an emergency situation, is just not acceptable.

Many students who were patients were angry about the changes as it might mean them travelling on expensive public transport to see their consultants.

However, parents and patients will be thinking the same things in Oxford, Southampton and other places where centres may be closed.

It shows the need to oppose all cuts in jobs and services. Of course parents want to save their local centres but we need a united campaign to defeat these attacks. 'Safe and sustainable' assures us that centres are not closing to save money - but what other motivation is there for this government?

The money exists to provide these important services. The government could go after the £120 billion lost in tax evasion and avoidance, for example.

The NHS should be fully funded in all areas to end the so-called 'post-code lottery' that will increase if our health service is further cut and privatised.