From The Socialist newspaper, 12 October 2011

Battle of Cable Street 1936 - When workers stopped the fascists 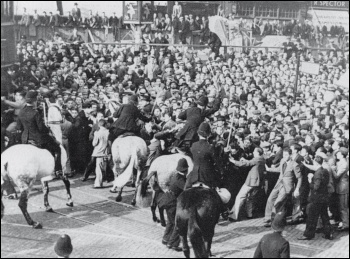 This month marks the 75th anniversary of what has gone down in history as the Battle of Cable Street. On 4 October 1936 thousands of workers across the East End of London rose up to prevent a march through their areas by the uniformed thugs of Oswald Mosley's fascists.

The fascist threat in 1936 was far greater than the relatively small far right groups around today. Hitler was in power in Germany, Italy had been under Mussolini's fascist jackboot for 14 years and the opening struggles had just begun in Spain where, despite the heroism of the Spanish working class, three years of bloody conflict saw the victory of Franco.

In Britain, one of the earliest fascist organisations, the British Brothers League, claimed around 45,000 members at the turn of the century. Mosley's British Union of Fascists (BUF) - the Blackshirts - which boasted a full time Defence Force, claimed 40,000 members and had the enthusiastic support of Lord Rothermere's Daily Mail.

This was the heart of Stepney, where over 60,000 Jews lived in cramped terraced housing, typical "two up, two down". Our house would later have the luxurious addition of a basement, built to afford shelter during the war.

The lead-up to the events of 4 October was a series of meetings throughout east London, as the fascists attempted to whip up working class opposition to Jews as the scapegoats for the economic crisis and saying "Jewish interests" were responsible for the looming war.

To consolidate his position, and to intimidate the population, Mosley proposed a march through the East End on 4 October: in full uniform. The fascists were to meet at Royal Mint Street, and, after a military style review of the troops, march in four separate groupings to meetings in east London.

There was an immediate response to this; the Jewish People's Council launched a petition calling for the march to be banned which gained 100,000 signatures within two days. There was massive opposition to the march. Yet, the anger and readiness to act on behalf of the youth and the rank and file of the movement was not matched by the leadership.

The Communist Party (CP) was at its strongest in the East End - CP member Phil Piratin was elected MP for Mile End in 1945. In the street where I lived as a child, virtually everyone was in the Party. However, the Young Communist League had organised a rally in Trafalgar Square on the same day as the march, in solidarity with the Spanish Republic. East London CP organiser Frank Lefitte put out a statement: "If Mosley decides to march, let him. Don't attempt disorder".

As for the Labour Party, George Lansbury, the hero of Poplar in 1921, wrote: "What I want is to maintain peace and order, and I advise people who are opposed to fascism to keep away from the demonstration."

The Jewish hierarchy organised a sports day out, trying to get the youth away from the East End: "Jews who, however innocently, become involved in any possible disorders will be actively helping anti-Semitism and Jew baiting... keep away". 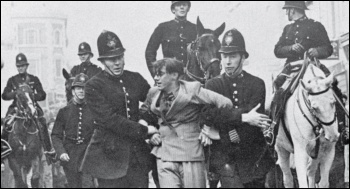 The largest Jewish settlement in the East End then was in Fairclough (now Henriques) Street. Along with the synagogue, ante-natal clinics and youth clubs that it housed, it was an organising and recruiting point for the Communist Party among the Jewish youth - it was there that my mother met my father and recruited him to the Party. They wanted to meet the fascists face to face in organised opposition.

The lessons of the Battle of Cable Street are many: the role of the labour and CP leaders, the fact that unity can be built in action. But it also has lessons for the building of a mass workers' party. The CP was widely seen as the leadership of the battle: party membership doubled between 1935 and 1937 and in 1945.

CP influence on the local council continued for some time. Yet, the chasm between the CP leadership, tied to the politics of Stalin, the Comintern and "popular frontism", and the rank and file caused an irreparable breach in the Party.

Joe Jacobs was expelled in 1937, and the rot continued. Phil Piratin, one of the leaders of the opposition to Mosley, had been elected to parliament in 1945 with 47.6% of the vote, but he lost his seat in the 1950 election, albeit with changed boundaries, with only 12.5% of the vote.

My father, a building site worker, left the Party in 1956 in disgust at the Soviet invasion of Hungary; he later donated towards the publication of Joe Jacobs' book Out of the Ghetto.

My mother's sister - and her husband, Sam, who had been involved in the Workers' Film movement, both life long Party members, left in despair in the 1970s, eventually joining the Labour Party.

My mother, now 93, is probably one of the last of that generation of East End Jewish communists who fought on the streets of Stepney. But the battle that they fought and won in 1936 should inspire us all in the battles we face today.

Interview with a Jarrow marcher

Marching in the footsteps of history

Strike on 30 November - no secret talks

'We have not gone away' say Southampton council workers

Sovereign debt crisis, recession... No way out under capitalism

Cameron's big 'them and us' society

Battle of Cable Street 1936 - When workers stopped the fascists

Portrait of a pension pilferer