From The Socialist newspaper, 7 December 2011 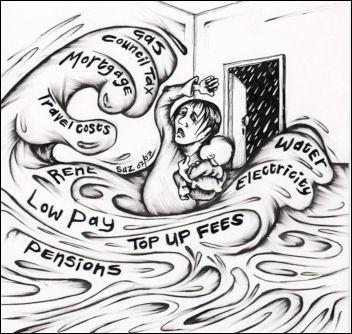 The Con-Dems have announced a 'housing strategy' that benefits big building companies and banks, including selling off more social housing stock and underwriting banks that offer 95% 'subprime' mortgages for newly built houses. New 'affordable' housing will have rents at 80% of the market level - better described as unaffordable!

In the North West no affordable homes were started. In the eastern region work started on just one. Perhaps Londoners should celebrate the 56 social rented homes started in the capital?

The threat of redundancy, falling pay and the prospect of rising interest rates also contribute to the prediction that the average age of first time buyers will rise to 40. Many who do buy struggle to pay their mortgage.

Will banks actually increase lending on the basis of the government's mortgage underwriting? Instead, profit-seeking lenders are likely to redistribute a fixed pool of mortgage funds from one set of borrowers to another to mop up the guarantee.

The government will also offer public land to building firms - on a build now, pay later basis - and look to make it more profitable to become a private landlord.

But lack of affordable housing means more people are already stuck in private rent homes, paying rising rents and knowing landlords can boot them out as they choose.

Not only do 1.5 million of these homes fail the government decent homes standard, 71,000 homes are actually dangerous and had serious 'Category 1' hazards.

Official figures show homelessness up 10%. Every day 400 more young people face life on the streets. Almost half of homelessness agencies are turning away young, childless homeless people due to a lack of resources. The number sleeping rough in London is already up 32% on the whole of last year.

The Con-Dems fear the political blowback from their cuts. Cameron and Clegg have been shown walking around sites talking about the 'need to build'.

The government has said it will restore 10% of the cuts to housing spending announced in last year's budget.

But last year's cuts amounted to 70% of spending on housing and were supplemented by housing benefit cuts.

In reality, the extra money is designed to help their friends in the banks and building firms.

The Socialist Party's demands for real action include:

East London Socialist Party: Election 2019 - fighting for housing for all