TUSC: Standing in defence of jobs and services 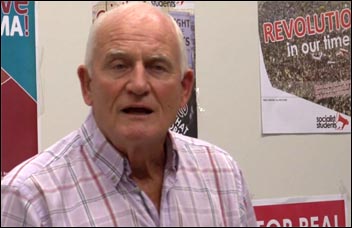 Tony4Mayor has shaken up Liverpool’s mayoral race after only a few days! Our campaign is making headway in the media, gaining great support in the trade unions and from individuals.

Tony Mulhearn is challenging Labour council leader and candidate Joe Anderson to a public debate about the real issues – the cuts, a future for young people, education, job creation, the NHS… We already have endorsements from Liverpool Against the Cuts, from socialist film-maker Ken Loach, and numerous local activists.

This alone vindicates our decision to stand, enlivening an otherwise dull coronation of Anderson. Tony is triggering a real debate, providing a voice for the ‘99%’ of society. Our campaign is the socialist and working class alternative to Anderson’s developers-dominated establishment candidacy, and to the assorted lesser imitators and ‘personalities’.

The Trade Unionist and Socialist Coalition (TUSC) is also contesting around a third of the council seats, to provide the necessary support for a TUSC elected mayor.

Big-name speakers are set to attend a Tony4Mayor rally on Thursday 26 April, starting 7.30pm at the Adelphi Liner hotel on Lime Street.

Tony has already been invited to a dizzying array of debates and discussions, mostly open to the public, ranging from the local unions to the Chambers of Commerce to a university based thinktank!

Perhaps most importantly, the campaign is touring workplaces and community centres across the city. Many local events are being organised.

For more information about Tony4Mayor or TUSC candidate: ring 07411 362 448, email [email protected], or see the blog at http://tony4mayor.wordpress.com/ Follow us on Twitter at tony4mayor1 and add us on Facebook at “Tonyfor Mayor”