From The Socialist newspaper, 2 May 2012

Step up action to defend pensions! Build a movement to

Kick out the Con-Dems and end austerity 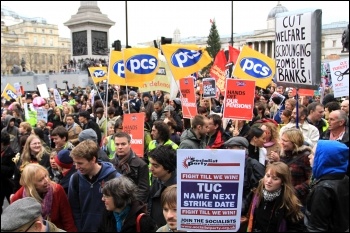 Just when the Con-Dems thought it was all over and they'd won, the public sector pensions fight is back on! This opens up the possibility to re-ignite a dispute which has been the focal point for the resistance to the government's austerity agenda.

Workers across all unions will welcome this step, particularly now as the first of three annual pension contribution increases is snatched from their wage packets. Meanwhile the ultra-rich are sitting pretty with their wealth up again this year!

The attack on pensions also means public sector employees face working longer and getting less at the end of it. Paramedics and care workers, for example, will be expected to work until they're 68 - with new starters threatened with working to 70!

Up to 500,000 public sector workers in the PCS civil servants' union, Unite in health, Ministry of Defence and the civil service, lecturers in UCU and members of the Nipsa public services union in Northern Ireland are striking on 10 May. They will be joined by RMT transport union members in the Royal Fleet Auxiliary also fighting to defend their retirement benefits.

The vote by Unison health members to reject the government's rotten 'Heads of Agreement', shows the potential to fully re-build the strike coalition that filled Britain's streets last November.

The two-million plus strike on 30 November (N30) should have been the start of a sustained campaign of national coordinated action, which we believe would have not only defeated the government's attacks on public sector pensions but could have even dealt the Coalition a death blow.

The PCS has balloted its members to take action over attacks on pay, privatisation and jobs as well as pensions. This is part of a sustained strategy with action planned for June; sectoral action to complement the national coordinated action; and, with Unite, a call for a trade union-led national demo against austerity before the summer.

Such a demo, on a weekend, taking up the questions of NHS cuts, regional pay, and pensions would give all those not striking on 10 May a chance to show their support for anti-cuts action and put pressure on the right-wing union leaderships. It could provide an answer to the many attempts to divide us; public sector workers from private, and along lines of gender, age, race, sexuality, disability, etc.

The 2012 budget showed a government of the rich for the rich, Murdochgate reveals the corruption at the top, with the media and police embroiled - but they are few and we are many. Let's use our huge potential strength to defeat all the cuts.

Continue by clicking this link:

Kick out the Con-Dems and end austerity

Fight privatisation: Save our libraries

NUS conference Support for left and for action

Don't accept the misery of austerity

Rotherham teachers stand up to bullying

TUSC: the electoral alternative to the parties of the rich

Sheffield marches against sexism and cuts

Planning for the Planet