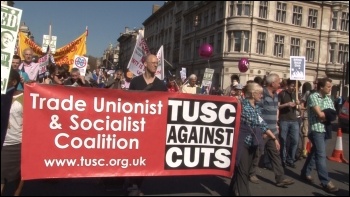 This year's elections were the second set of local polls contested by the Trade Unionist and Socialist Coalition (TUSC) since it was formed in early 2010. How did TUSC do?

But the results say something. The BBC, followed by the other media, headlined 'growing support for Ukip' on the basis that it "gained 13% of the vote in the seats where they stood". Ukip stood in more seats (19%) but still TUSC council candidates averaged 6.2% 'where they stood' - but was this reported? Or the victory of two TUSC-backed candidates, Michael Lavalette in Preston and Peter Smith in Walsall?

The BBC has form. It broadcast a television national news item on April 25 on the prospect for smaller, 'fringe' parties in the local elections but completely excluded TUSC. It featured the English Democrats, who stood in 91 seats, and Respect - but did not explain how there could be a surge to George Galloway's party when it was contesting just 15 seats across four councils.

One thing is clear - TUSC got a higher share of the vote than its share of media coverage! The official letter of complaint from TUSC to the BBC has still not been answered.

The total vote for all TUSC candidates was 43,671. This includes the votes in the Liverpool mayoral contest, and the more disappointing results in the London Assembly list elections (see separate reports: 4,792 mayoral vote for Liverpool 47 candidate and London elections - TUSC: A marker for future struggles).

TUSC candidates contested 98 wards against Liberal Democrats. In the others - one quarter of the wards we stood in - one of the 'parties of government' was unable to field a candidate!

Where there was a clash, TUSC outpolled a Liberal Democrat candidate in one in five wards (22). Not a broad sample - but not insignificant. Last year the Lib Dems outpolled TUSC in seven out of eight contests.

Not every area saw increased electoral support. Our average vote slipped from 3.3% to 3% in Southampton, while still polling 1,227 votes city-wide.

Southampton was a national Labour target - with two visits from party leader Ed Miliband - where Labour-affiliated unions poured in resources to defeat the Tory council.

A newsletter to Southampton Unison members carried an article headed 'Why Unison does not support the Trade Unionists and Socialists Against Cuts', stressing that "despite the name of the coalition it is not endorsed in any way by Unison".

But this attack shows the significance of TUSC. The Greens also stood ten candidates in Southampton. Where was the Unison material attacking them?

But the Greens are not seen as part of the labour movement and, with their acceptance that councils can do nothing but implement government cuts, are not a serious challenge to Labour-supporting trade union leaders.

The importance of TUSC's election campaigns lie, above all, in their potential to act as a catalyst in the trade unions for the idea of independent working class political representation, given Labour's transformation into another party of capitalism.

With the support gained from militant trade unionists, and in the modest advances in the votes achieved, May's elections were another step forward in that task.

A full breakdown of the results is available on the TUSC website at www.tusc.org.uk