Link to this page: https://www.socialistparty.org.uk/articles/14508 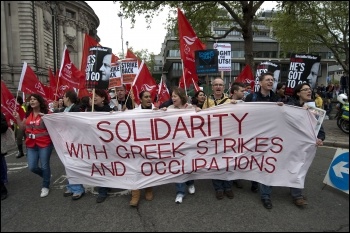 Voters - not only in Greece but also in the recent French presidential elections, the German regional elections, in Italy's local elections and indeed in the recent elections in the UK - have punished the ruling parties for making the working and middle classes pay for the failure of the greedy capitalist banks and the capitalist profit system as a whole.

But capitalist austerity has not only been given a huge thumbs' down in the political arena. Throughout Europe there have been massive workers' strikes and protests movements.

In Spain, a general strike in March has recently been followed by mass protests in the country's cities by the Indignados movement. In Greece there has been a succession of general strikes over the last two years. 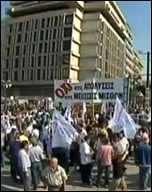 Following the 6 May election earthquake in Greece, which saw a hammering of the pro-austerity parties and a huge rejection of the 'Troika' (European Union, the European Central Bank and the International Monetary Fund), the main parties failed to form a coalition government.

Attempts by the Greek president to oversee a 'national unity' government or to form a 'government of technocrats' also failed. New elections will be held no later than 17 June.

The supporters of Xekinima strongly supported the decision by the left-wing party Syriza to refuse to join any government with pro-austerity parties, such as Pasok, the former social democratic party, and the right-wing New Democracy.

Syriza (Coalition of the Radical Left) leapt from 4.6% to 16.78% (52 seats), to become the second largest party in the last elections, largely on the basis of its anti-cuts policies and call for a united left government.

Over the following week, the main political parties desperately tried to find a way to avoid new elections. The Greek ruling class is disorientated. Their traditional political tools of support, New Democracy and Pasok, saw their vote dramatically fall.

This was the result of years of their austerity measures that led to mass poverty and homelessness, a steep fall in living standards and rising suicides. By the end of 2012, GDP (total output) is predicted to contract by 20% (since 2008) and unemployment to rise by 25%.

Leaders of New Democracy and Pasok, and most of the media, hypocritically blame Syriza for making the country return to elections. But Syriza's leader, Alexis Tsipras, correctly rejected their arguments, saying the political establishment wanted Syriza to become their "partner in crime" in making new cuts.

The aversion of the main party leaders to democratic elections is mainly because Syriza is tipped to become the largest party, according to opinion polls, winning anywhere between 20.5% to 28%. Syriza is the only party growing in the polls, while others are falling. New Democracy is projected to win 18.1% of a new vote and Pasok 12.2%, their lowest ratings in nearly 40 years. This reflects the huge popularity of Syriza's public opposition to yet more austerity cuts.

The neo-fascist Golden Dawn scored big successes in last week's elections and entered parliament for the first time. But many of those who voted for Golden Dawn to "punish the politicians", now see the real far-right, anti-working class character of the party. Golden Dawn has subsequently dropped in polls, to just above 3% in some cases, which would see the party fail to win any MPs in new elections.

Nevertheless, the working class cannot be complacent about the threat of the far right and reaction. Since winning parliamentary seats, Golden Dawn supporters have viciously attacked immigrants.

Xekhinima calls for the creation of local anti-fascist committees to include democratically-organised defence, extending to communities, schools, universities and workplaces. If the left fails to offer a viable socialist alternative, the far right can make new gains and the Greek ruling class, which previously resorted to military rule, will also seek to deploy more authoritarian measures against the workers' movement. 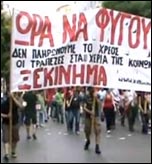 The bosses' parties threaten that Greece will be forced to leave the eurozone if new elections are called and Syriza comes to power with its anti-austerity policies. Syriza leaders say they want to take measures to end cuts and to improve living standards and that Greece should stay in the eurozone.

While the vast majority of Greeks vociferously oppose the austerity programme they also want to remain in the eurozone. They understandably fear the aftermath of exiting it.

There are endless warnings from the media and cuts-making politicians about what leaving would entail: a dramatic fall in living standards, financial bankruptcy and hyperinflation. Not surprisingly, one recent opinion poll recorded that 78% of respondents said they wanted a new government to do whatever it took to keep the euro. At the same time, however, to stay in the euro straitjacket promises only endless austerity for Greeks and an increasing number of them are demanding to leave.

Notwithstanding the aim of Syriza leaders to stay in the eurozone, even if they follow their current policies in a new government, limited as they are to a 'radical' renegotiation of the bailout terms they will face stiff opposition from the EU and Greek capitalists, most likely leading to Greece's exit from the euro.

The Troika has indicated that it is prepared to reconsider aspects of the bailout terms but not the 'core' issues, which means new assaults on the living conditions of Greek people.

Yet Syriza is not preparing its own supporters and the working class generally for the consequences of confrontation with the Troika, the markets and the Greek ruling class or taking account of a likely ferocious media and bosses' parties scare campaign that will be unleashed against Syriza during a new election campaign.

Some Syriza leaders argue that when they form a new government, the Troika's bluff will be called and they will be forced to back down and make big concessions.

They point out that the EU leaders are terrified of a Greek default and exit from the euro, which would cause a new financial crisis and deep recession throughout the EU, with countries such as Spain, Portugal and Ireland also possibly forced out of the euro.

Angela Merkel and EU president Jose Manuel Barroso openly stated that if Athens cannot abide by the bailout rules, Greece will have to leave. This may partly be a threat to force Greece to form a coalition government to continue with cuts, as well as an attempt to show what will happen to any eurozone country that dares to stand up to the Troika.

In this situation, what should the Greek Left do? Xekinima welcomes Syriza's public call for left unity. Syriza should open up and develop its structures as a broad left alliance, so that fresh layers of workers and youth can join and decide party policy democratically. Xekinima supports united action of the left parties ahead of the next elections and for working people to vote for Syriza.

This should be done concretely, with the convening of mass assemblies at local, workplace, regional and national levels to discuss and agree programme, demands and electoral tactics, to campaign for a left government and to strive to ensure that such a government pursues anti-austerity and pro-working class policies.

The communist party (KKE) and Antarsya (the Anti-capitalist Left Cooperation) both took a sectarian attitude before the last elections and rejected Syriza's 'left unity' proposal, with the result that their votes remain stagnant. To the amazement of many millions of workers, the KKE leadership still continues to refuse to form a block with Syriza.

But under growing pressure from their rank and file, and the working class in general, a section of Antarsya has indicated that it is prepared to have joint collaboration with Syriza.

Many KKE members also speak of the need to "make unity with Syriza". Xekinima urges Syriza to make a bold call to the rank and file of the KKE and other left forces to join in an electoral bloc on an anti-austerity platform and to fight for a left government with a socialist programme.

Xekinima will campaign for a government of the Left and call for it to carry out anti-austerity, pro-working class policies and to adopt a socialist programme to transform society.

A programme for united action by Syriza and the KKE around opposition to all austerity measures, for cancellation of the debt, public ownership of the main banks and industries and for socialist change, would win widespread support from the working class, youth and middle class.

Syriza should make a call for a resurgence of mass action in the workplaces, colleges and communities and for combative, democratic trade union organisation.

Pro-working class policies would predictably cause screams of outrage from the bosses in Greece and the EU. They would probably quickly kick Greece out of the eurozone.

Ejected from the euro, a workers' government would need to carry out an emergency programme, including state control over imports and exports and capital controls to stop the "flight of capital" by profit-hungry property-holders and multinationals.

Democratic committees should oversee the supply of foodstuffs, medicine, oil and other vital goods to working people.

A workers' government in Greece would link up with the workers' movement in other crisis ridden eurozone countries, like Spain, Portugal, Ireland and Italy, to break the diktat of the Troika, the bosses' EU and capitalism.

These countries could form a confederation on a socialist basis and begin the international democratic planning and coordination of the economy, as part of a fight for a full socialist confederation of Europe, on a free and equal basis. This would win massive support quickly across the working class of Europe.