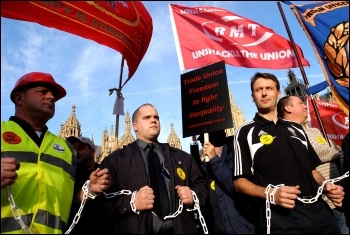 The RMT and POA call on parliament to unshackle the unions in 2010, photo Paul Mattsson   (Click to enlarge)

Adrian Beecroft is a 'venture capitalist', investing money where he thinks he can make huge profits. One of the companies he finances is Wonga, the 'pay-day loan company' that charges extortionate interest to those unfortunate enough to have to utilise its services.

His Beecroft report extends his extreme Thatcherite ideas to the whole of the country's workforce. Not content with Britain having some of the most anti-working class employment legislation in Europe, Beecroft wants to see the government implementing the idea of 'no fault' dismissals. This really means 'no rights'.

With very little notice, no consultation and minimal compensation, workers that any boss did not like could be sacked at a whim. This, of course, could include trade union workplace reps. What a cheap and nasty way of getting rid of 'troublemakers'!

Beecroft claims this would create more jobs. The only jobs it might create are low-wage jobs with bosses acting like dictators! He was assisted in the drafting of the report by David Cameron's former adviser, Steve Hilton, now departed to Stanford University in California.

Liberal Dem business secretary Vince Cable wants to kick the report into the long grass, at least the most contentious bits. Beecroft said that Cable was a 'socialist' for opposing its recommendations! Yet the Lib Dems have collaborated with adverse changes to workers' rights in the last two years, including the extension of the period of employment, from a year to two years, before a worker has full employment rights.

If the government tries to implement any of this report, the TUC and individual trade unions should call conferences as preparation for protests and industrial action against it. This should be linked to the campaign to end all the anti-trade union and anti-worker laws.