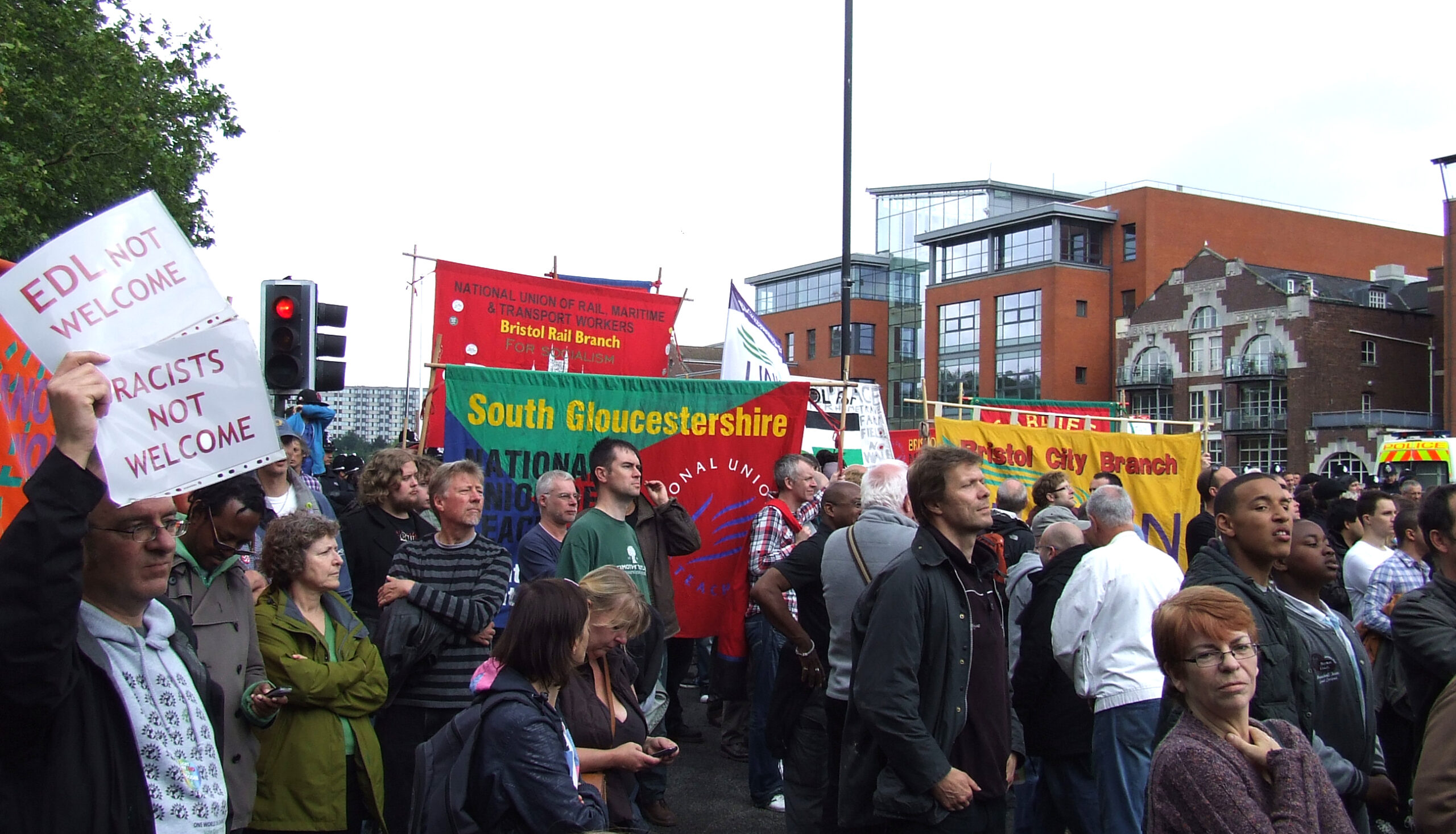 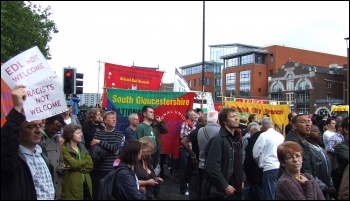 About 1,000 anti-racist demonstrators gathered in various locations across Bristol to protest against the march of the far-right, racist English Defence League (EDL) on Saturday 14 July.

As the event coincided with the Bristol Pride event there was also a separate anti-racist march organised by the LGBT community.

Pressure from campaigners had forced the EDL to keep their march confined to backstreets of the city, far away from passers-by and ordinary Bristolians.

Their march which was only seven minutes long, muscled up a national mobilisation of only 300 supporters. An enormous £500,000 was spent policing it.

There were over 1,000 police officers drafted in from all over the country, with 14 arrests on the day including for racially aggravated assault.

In the days preceding the march the police had written a series of belligerent articles in the local press sowing confusion and attempting to intimidate anti-EDL protesters into staying at home.

This even went so far as a last minute change of venue, with protesters being warned not to assemble in the planned assembly point in the centre of Bristol.

This did not prevent trade unionists, anti-racists, members of community groups and even young families with children from assembling in the centre for a march through the city and rally in the nearby Castle Park.

The main organisers of the event, a temporary group set up under the name ‘We Are Bristol’, in reality Unite Against Fascism, also bear some responsibility for the confusion on the day.

Weeks of organising meetings between UAF and local anarchist groups had unfortunately resulted in the calling of two separate events, one in the centre of town and one at Temple Meads railway station.

Even as late as the week before, no negotiations had begun with the police, no march had been organised beyond a ‘static protest’, and no trade union stewards had been appointed or organised to help defend the march from EDL attack or police harassment.

The Bristol & District Anti-Cuts Alliance had raised concerns about this and put out a call for stewards.

As a result, on the day, local trade unionists, including Socialist Party members and a large delegation from PCS, stepped up to steward the protest.

But even after the march had begun to move, led by various trade union banners from across the region including Cardiff Trades Council, there was an attempt by UAF to ‘hold the centre’ and keep part of the protest in one place, despite having no clear strategy for breaking through police lines or confronting the EDL.

It was at this point that several protesters were arrested and the police moved in to kettle the remaining protesters.

This would have cut the protest in half before it had even started but was fortunately prevented by the trade union stewards who kept the march together.

Assorted Labour Party members – councillors, an MP and a prospective mayoral candidate – turned up to speak at the final rally.

However, no criticism of New Labour’s support for austerity was raised by the UAF’s speakers. Only Roger Thomas, speaking in a personal capacity from PCS, drew attention to the Labour Party’s culpability in administering the cuts that destroy communities and help racism to thrive, and called for an alternative of jobs and homes, not racism.

This message got a great response and shows that many demonstrators understood that the fight against racism and all forms of discrimination needs to be linked to a fight against the conditions that divide us in the first place.

The UAF organisers said they could not take up these questions because they wanted a ‘broad umbrella’ that would maximise turnout on the day. However, a mass united demo was not achieved, instead there were disparate protests.

Faith groups and Muslim community leaders followed the Liberal Democrat councillors in tolerating the EDL’s march in return for holding a ‘multi-faith’ event in celebration of diversity on Sunday 15 August. Some Muslim leaders even went so far as to call for dialogue with the EDL!

It was the organised labour movement that was best able to outnumber and embarrass the EDL on the day, and even though, as a result of the massive police presence, we could not physically block the EDL from marching, this was still a success.

But the EDL and groups like them will not be defeated unless we can build fighting organisations to resist the austerity that does so much to alienate and divide ordinary people of all races, religions and backgrounds.

This version of this article was first posted on the Socialist Party website on 16 July 2012 and may vary slightly from the version subsequently printed in The Socialist.