Link to this page: https://www.socialistparty.org.uk/articles/15132 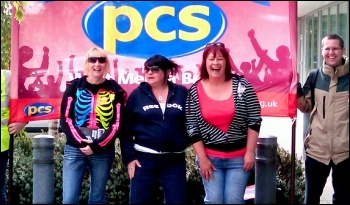 In the current climate of cuts and attacks on working and living conditions, PCS union members in HMRC (revenue and customs) have been able to secure significant agreement from their employer on jobs, privatisation and sickness absence policy.

Strike action that was due to begin on Monday 3 September has been suspended for two months in order to implement the deal.

PCS members in other civil service departments and workers across the public sector should take confidence at this result and feel renewed to fight similar attacks facing them at work.

In an historic development, HMRC has advised the PCS that it intends to make the case to the Treasury for additional reinvestment to tackle tax avoidance and the tax 'gap'.

It will work alongside the union to bid for reinvestment in jobs in HMRC. It will change the contracts of over 4,000 temporary workers, meaning they now have the right to apply for permanent jobs across the civil service.

It has committed to £34 million of reinvestment in 1,000 extra temporary jobs and given commitments that the aim of the privatisation trials currently being conducted is not to outsource the work.

PCS members in HMRC can take confidence from the fact that their employer has also reaffirmed its commitment to avoid compulsory redundancies and has agreed to look at options for replacing overtime working with permanent jobs. This undoubtedly provides workers with added job security.

This has been achieved through the hard work and campaigning efforts of PCS members and reps across HMRC.

As part of the Tax Justice for All campaign, strike action and action 'short of strike' have been key to getting the employer to make significant movement on the major issues facing union members in HMRC.

Although HMRC states that it cannot give assurances on job cuts as they are dictated by the Cabinet Office, to have this employer commit to press the case for extra resources is unprecedented.

The political campaigning will continue as the union continues to argue that there is an alternative to public sector cuts.

PCS members in HMRC will be at the forefront of organising campaigning activity, culminating in a lobby of parliament on 17 October.

Also, if the employer reneges on any aspect of the deal, the group executive committee will not hesitate to call strike action.

Yet again PCS is at the forefront of fighting against the Tory austerity agenda and shows what can be achieved through hard work and a leadership prepared to fight to defend its members' jobs and conditions.

These gains will be felt for a long time and will help to continue to build a strong, relevant union in the workplace capable of facing and fighting attacks head on in the future.

A PCS member in HMRC