Link to this page: https://www.socialistparty.org.uk/articles/15210 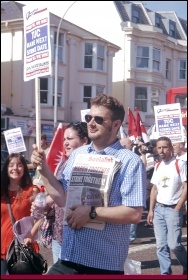 Following what was described by one observer as the best debate she had ever witnessed at a TUC congress, union delegates voted overwhelmingly for 'motion 5', moved by the POA union (prison officers) in favour of a general strike against the government's austerity.

Although the wording of the motion qualified the general strike call, arguing for "coordinated action where possible with far reaching campaigns including the consideration and practicalities of a general strike", the sentiment and motivation behind it was made clear by the speakers in favour.

They pointed to the brutal attacks being made on the most vulnerable in society and on all workers by the Con-Dem government and the need for them to be stopped by the trade union movement leading powerful general strike action involving the public and private sectors.

Hard hitting speeches along these lines were made in favour of the motion by Steve Gillan from the POA, Bob Crow from the RMT (who seconded it), John McInally from the PCS and a number of others.

A Ucatt representative had a big effect when he urged delegates not to make 'the mistakes of the past' in failing to lead action, and he reminded everyone that when the trade union leaders threatened a general strike in 1972 after the jailing of the Pentonville Five dockers, those workers were released. 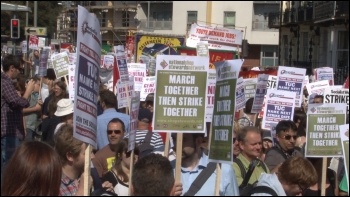 Opposition speakers from Prospect, the ATL, Balpa, NASUWT and Usdaw tried to convince delegates to vote against the motion by claiming that most trade union members don't want a general strike, by arguing that it's impossible to achieve and that the call for one would be a propaganda weapon for the government.

In replying to the debate however, Steve Gillan, referring to those who argued that the government would use the call for a general strike as 'a big stick to beat us', answered forcefully: 'The government is already using a big stick against us, and it is hurting'.

The passing of this motion is a great step forward in the battle that has been waged to push the leaders of the TUC towards mobilising the weight of the trade movement against the government's cuts agenda.

Support delivered for the resolution from the large unions Unite and Unison to add to that of unions such as the RMT and PCS, reflects the mood of rank and file trade union members in favour of decisive action to stand up to the government.

The Socialist Party and the National Stop Stewards Network welcome the passing of the POA motion; both have been at the forefront of spearheading and mobilising support for the calling of a 24-hour general strike.

In particular, the inspiring and well attended march and lobby of the TUC organised by the NSSN on Sunday played an important part in building momentum for this victory.

Now we need to demand that the TUC general council urgently discusses the naming of a day for the strike.

We also need to help make sure that the 20 October TUC demonstrations in London, Belfast and Glasgow against the government's agenda are huge, and use those events as an opportunity to further develop support for a 24-hour general strike and for concrete preparations for it by the trade union leaders.

This version of this article was first posted on the Socialist Party website on 11 September 2012 and may vary slightly from the version subsequently printed in The Socialist.