Link to this page: https://www.socialistparty.org.uk/articles/15559 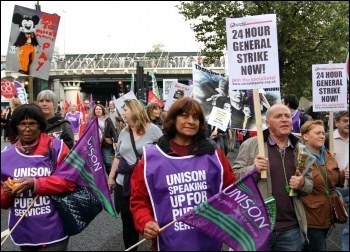 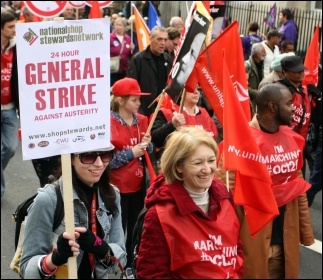 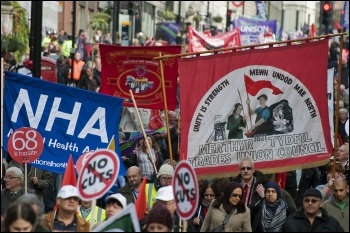 Workers travelled from across Britain to London today to express their fury at the Con-Dem government's vicious cuts in living standards.

The Trades Union Congress (TUC), which organised this march against austerity, estimates that over 150,000 attended in London, along with tens of thousands in Glasgow and Belfast. 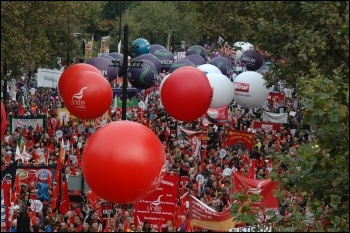 The mood of the demonstrators was different to the previous TUC march 18 months ago. The reality of the cuts, combined with the experience of the previous year's struggle, has lead to a greater awareness of both the urgency of a fightback, and for it to go beyond demonstrating and onto the industrial plane.

While massive, this was nonetheless a smaller demonstration than on 26 March 2011 - when over half a million took to the streets.

The many who attended, however, came determined to make sure that it was more than a 'parade'. 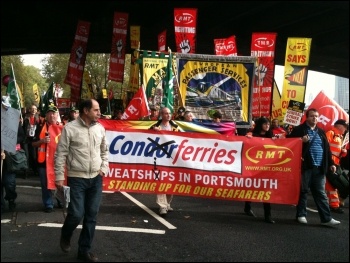 Len McCluskey, general secretary of the union Unite, got the overwhelming endorsement of the crowd when he asked all those who supported the organising of a general strike to raise their hands.

Bob Crow, general secretary of the RMT and seconder of the motion to 'consider a general strike' that was passed at the recent TUC congress, got massive applause when he called for a 24-hour general strike (see video below).

Mark Serwotka, general secretary of the PCS union, also called for coordination of strike action across the trade union movement.

Huge support was received for the campaign by the Socialist Party and the National Shop Stewards Network (NSSN) to demand that the TUC name a day for a 24-hour general strike and then launch a massive campaign to mobilise the working class behind this call.

In contrast to the enthusiastic reception given to leaders calling for general strike action, Labour leader Ed Miliband was booed by many in the crowd when he talked about the need for any government to make cuts, including Labour.

This demonstration opened a new phase in the war against austerity, giving a glimpse of a more hardened and militant working class.

There was a widespread interest in socialist ideas, with many applying to join the Socialist Party. 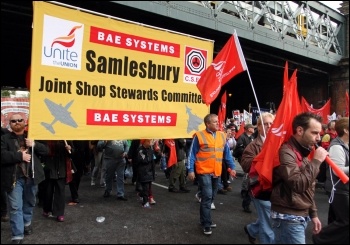 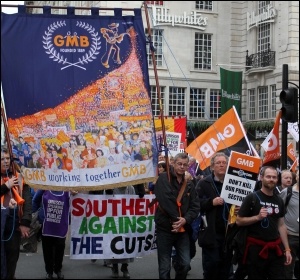 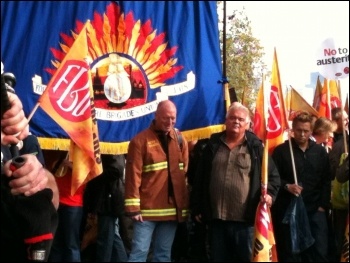