Link to this page: https://www.socialistparty.org.uk/articles/15711 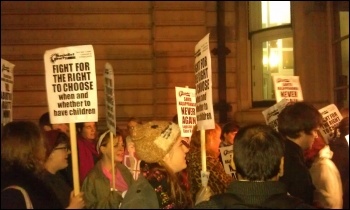 Following the tragic death in Ireland of Savita Halappanavar after being denied a medically necessary abortion of a miscarrying foetus, protests are continuing across the world for a change in Irish law.

"Savita's death has ignited an existing anger at the horrific situation facing women in Ireland. On Wednesday night we joined 200 protesters outside the Irish embassy in London calling for immediate action to legislate for Case X, which stipulated 20 years ago that abortion should be allowed in cases where the mother's life is at risk".

Another protest has been organised for this Saturday, 17th November, at 4pm outside the Irish embassy on Grosvenor Place, London, in solidarity with a protest in Dublin at the same time. 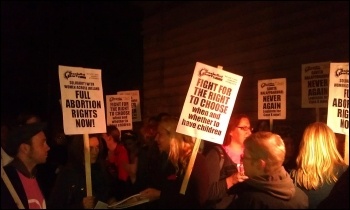 Protesting against Ireland's abortion laws outside the Irish embassy in London, 14.11.12, photo by N Cafferky   (Click to enlarge)

In England and Wales the Socialist Party is asking people to join us in delivering a letter of protest to the Irish embassy on Grosvenor Place in London at 9am on that day, and solidarity actions.

This will include taking part in the National Union of Students demonstration in London on the same day.

"We will also be petitioning on the day and will have a model motion for student unions calling for legal abortion in Ireland.

"It is apt that we take part in this demonstration against fees, cuts and privatisation in education. Those politicians who call themselves 'pro-life' are the very same who vote to attack the living conditions and rights of children and families across the world.

"Why do they only care about children before they are born? Because in reality it has nothing to do with life and everything to do with having control over women and their bodies."

Protests are also organised outside the Dail in Dublin and Town Hall in Bangalore, the capital of Kanartaka, the region of India Savita was from.