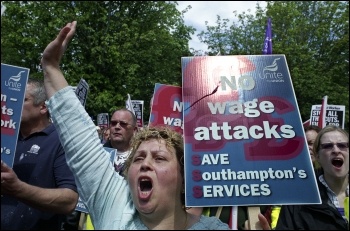 Over 1,000 council workers, striking Medirest cleaners and others marched through Southampton on 13 June in a powerful show of solidarity against vicious council cuts and the scandalous consequence of the private sector in the NHS , photo Paul Mattsson   (Click to enlarge)

On 13 November, the Southampton Labour council, elected in May 2012, announced a record £25 million cuts budget for February 2013.

These cuts will leave Southampton without any council-run youth services. A youth worker said: "Hundreds of young people use these facilities, where are they going to go? They are already planning to organise protests and demonstrations.

"The community will not accept this. Workers were in tears when the news was broken. We have to say enough is enough."

Socialist Party members and Trade Unionist and Socialist Coalition supporters made a deputation to the council: "The Labour council has a mandate to oppose these cuts.

"We call on them to use their access to £70 million in current reserves and prudential borrowing to protect jobs and services.

"This would buy time to mount a mass campaign mobilised to demand extra resources from the government."

We were joined on the council steps by rebel councillors Keith Morrell and Don Thomas. Our 'no cuts' call has been carried widely in the local media. Reflecting the growing pressure, Labour councillor Simon Letts was forced to respond.

Labour fears using reserves and borrowing could be deemed illegal. This is not true.

Labour is seeking to establish a 'straw man' of 'refusing to set a budget' - a bogus argument that no one is making - to undermine support for our strategy.

But how can you build support for such a campaign while you swing the axe at hundreds of jobs and vital services in the city?

Attention was focussed solely on opposing the Con-Dem government, without any demands placed on Labour councillors.

The union resolution proposed strike action on the budget-setting day in February, more a proposal for a funeral than a fightback.

Union officers ruled out the possibility of using reserves. Former council worker and Unison member Nick Chaffey explained to a branch officer how using council reserves was not illegal.

He was encouraged to speak in the meeting but was blocked from doing so by the chair. However, several speakers from the floor expressed doubts at the limitations of the resolution and called for strike action.

It will be essential to stiffen the resolve of members to call for urgent action before the budget is set in February.

This campaign has to be linked to council workers across the country and the need for coordinated action which was correctly included in the resolution, backing the call for a 24-hour general strike.

Southampton Unite and Unison have given their support to rebel councillors Keith Morrell and Don Thomas due to their stand against the cuts which union members strongly back.

Keith and Don's continued opposition will ensure that a fighting alternative to the surrender offered by Labour is heard loud and clear.