Link to this page: https://www.socialistparty.org.uk/articles/15742 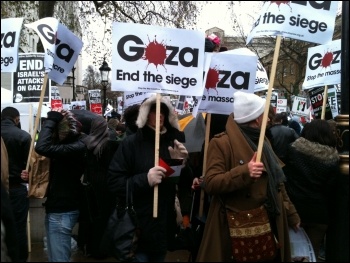 Over 10,000 people demonstrated and marched in London on Saturday 24 November to condemn the Israeli bombardment of Gaza.

The turnout was greater than expected, considering that a ceasefire was declared last Wednesday and there was continuous rain all day, but people turned out to make their views and anger heard.

The march assembled at Whitehall near Downing Street, went along Piccadilly, round Hyde Park Corner - bringing all traffic to a halt - and ended at the Israeli embassy in South Kensington. 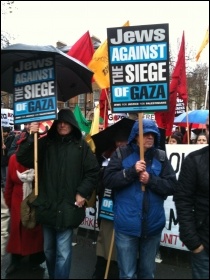 Among the chants were: "One, two, three, four, occupation no more"; "End the seige of Gaza, end the siege now"; "Free, Free, Palestine"; "Palestine will be free, Netanyahu you will see"; and Socialist Party members added the chant: "No to war and occupation, Spend the money on health and education".

Osman and Salman, two demonstrators, explained: "We're here for justice, and because the Palestinian side of the story doesn't get heard.

"We're supporting innocent men, women and children in Gaza, their story needs to get out".

Demonstrator Sammi Ibrahem said: "I am from Gaza. It is like a concentration camp there.

"Committees of Israeli officials even decide what food is allowed into the strip for the Gazans. Any moment people can be shot.

"Yesterday a young man was shot just for walking near the border, and this was after the ceasefire".

Another protester, Mark Skelton, said: "I'm a catholic and I went to Bethlehem and Nazareth in March. I don't agree with suicide bombings but Gaza is a small enclave and it's being bombed to smithereens.

"Israel has built huge settlements; you can understand the massive frustration of the Palestinians".

Latifeh, also on the demonstration, explained why she was there: "I'm Palestinian. What the Israeli military forces are doing is a complete violation of human rights.

"It's an organised massacre and the western governments - like those of the UK and US - are doing nothing about it. In fact they're supporting it". 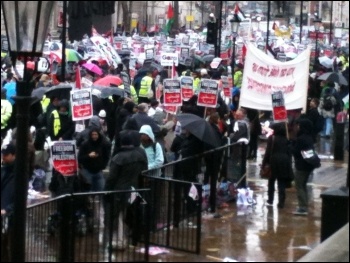 Like during the protests during the eight-day onslaught on Gaza, Socialist Party members gave out hundreds of leaflets (text below) that were readily taken and they sold many copies of the Socialist.

Although a ceasefire started on 21 November, protesters - including a strong contingent from the Socialist Party Plymouth branch - showed their opposition to the bloody, offensive war policies pursued by Israeli leaders Netanyahu, Barak and Lieberman.

Socialist Party member Tom Taylor commented: "Even though the rain was very heavy, people responded well to our leaflet giving our party's position".

Alex said: "While we condemn the state terror being inflicted by the Israeli government on the Palestinians, we also defend the rights of Israeli workers and their families.

"We are actively promoting the importance of working class support for the Palestinian struggle, for independent workers' organisations in Palestine and Israel, and for democratic socialism in Palestine, Israel and throughout the Middle East with democratic rights for all national minorities".

On Friday 16th November at 5pm, approximately 300 people of many different ages, ethnicities and backgrounds, assembled at the city centre.

With placards reading 'end the bloodshed in Gaza' and 'Free Palestine', protesters held a noisy vigil as large numbers of people drove by hooting their horns in support.

As numbers grew and the anger intensified, activists took to the streets and marched on the BBC to oppose its biased, pro-Israeli coverage of the Middle East.

As the demonstration drew near, activists, including Socialist Party members, headed to occupy the BBC! But we were blocked by a line of police and there were mounted police round the back.

Choosing to surround the front of the building chants of 'British Bullshit Cooperation' and 'end the biased reporting' rang out through the affluent Clifton area.

After the inspiring and impressive autonomous action of Friday night, activists again gathered at the centre the following day, this time in the afternoon.

An impressively large and multicultural demo weaved its way through the city, picketing shops and businesses that deal with Israel and chanting 'boycott Israeli goods!' As with Friday's action the overall response from the public was extremely positive, with a good number joining the action.

You can see a video of the demonstration at the BBC on the Socialist News South West youtube channel: http://www.youtube.com/watch?v=MfYmZgVKOLY&list=UUM_iQQByOU6HBRr8CkFPqlg&index=1&feature=plcp

During the Israeli government's eight days of brutal assault on the Gaza strip, over 163 Palestinians were killed, 1,235 wounded and the entire 1.7 million population of the strip traumatised.

More than 30 children were among those killed by the Israeli army's high-tech missiles.

Among the opening strikes was the assassination of the military leader of Islamist party Hamas, Ahmed Jabari, despite him then having just agreed to a ceasefire intended to stop military attacks from both sides.

Many more Palestinians than Israeli Jews were killed in the attacks prior to Israel's week of intensive bombing, but British prime minister David Cameron and foreign secretary William Hague blamed Hamas as bearing "principal responsibility".

They refused to condemn the Israeli regime for deploying its vastly stronger military might.

75,000 Israeli army reservists were called up in preparation for a land invasion, but international pressure and lack of firm support in Israel for going in on the ground contributed towards Israeli prime minister Benjamin Netanyahu agreeing to a ceasefire on Wednesday 20th November. 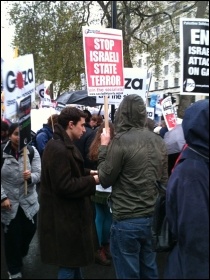 Gazans celebrated in the streets, but they realise it's a very unstable ceasefire agreement as the Israeli leaders could decide to take anything they deem as a provocation as a reason for a renewed onslaught.

Israeli defence minister Ehud Barak confirmed this when he said that the ceasefire "could last nine days or nine weeks or more but if it doesn't hold, we know what to do and of course, we will consider the possibility of resuming our activity if there is any firing or provocations".

No alleviation of the acute suffering of the Gazan Palestinians has yet been agreed, just 'talks' towards 'easing' the six-year blockade of the strip that has condemned them to terrible poverty, high unemployment and virtual prison camp conditions.

The Israeli regime's offensive was a nightmare for the Gazans and will bring no peace and security for the Israeli people.

It was partly fuelled by the power hungry desire of Netanyahu and his fellow ministers to do well in the forthcoming Israeli general election.

They want to distract the attention of Israelis away from cuts in services and living standards and give an impression of strengthening security.

They are alarmed about Hamas having new points of support in the region following the Muslim Brotherhood victories in Egypt and Tunisia and also increased support from Turkey.

A few weeks ago the emir of Qatar visited Gaza and pledged $400 million of investment, which boosted Hamas, to the anger of the Israeli leaders.

But their blood-filled strategy had the potential to spiral out of their control and rebound on them by massively inflaming relations between countries and within them; protests against the Israeli attacks broke out in Egypt, in other Arab countries and worldwide.

Netanyahu and Co argued that they have to stop the rocket attacks from Gaza. That was also the declared aim of the invasion of Gaza in 2008-09, but it failed to stop them, as will this offensive too.

No amount of force will prevent the masses in Gaza from resisting the occupation and struggling to make their lives more tolerable.

However, the indiscriminate firing of rockets into Israel and attacks like the recent bombing of a bus in Tel Aviv are a mistaken strategy that unfortunately won't further the Palestinians' struggle.

Four Israeli civilians were killed by rockets fired from Gaza during the eight day Israeli offensive.

Such attacks bring greater repression down on the Palestinians and cannot help win Israeli working class people to their cause. 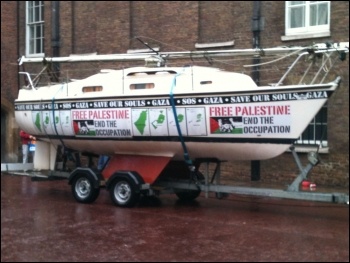 Two protesters decorated their boat and brought it to the demo!, London 24th November 2012, photo JB   (Click to enlarge)

The Palestinian masses can have no trust in regimes like Qatar and Turkey. They need to build their own organisations that can democratically organise defence and take offensive initiatives based on mass struggle - such as against the blockade and land seizures.

Neither the right-wing Islamist Hamas nor the Fatah-led authority in the West Bank are prepared to do this - they have no viable strategy for defeating the occupation or for providing decent living standards.

In Israel, following the unprecedented social movement involving hundreds of thousands of people in 2011, a new workers' party is needed to concretely advance the aspirations of that movement - for decent housing, services, pay etc.

The Socialist Struggle Movement in Israel/Palestine (part of the CWI - Committee for a Workers' International, to which the Socialist Party is also affiliated) participated fully in that movement and in the anti-war demonstrations in Israel during the attack on Gaza, calling for an immediate end to the bloodshed and the removal of the present right-wing Israeli government "of big business and the settlements".

It will be through the building of new mass workers' parties in the region that the pro-big business agendas of the capitalist parties can be challenged and thrown out, and socialist ideas can start to take hold.

That will create the basis to build democratic socialism in Palestine, Israel and throughout the Middle East, with guaranteed rights for all national minorities.