Link to this page: https://www.socialistparty.org.uk/articles/16140 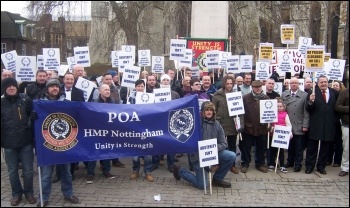 The POA prison officers' union held a lobby of parliament on 13 February against prison closures, overcrowding and privatisation. 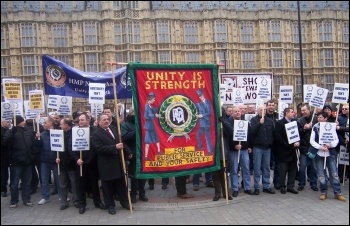 POA assistant general secretary Joe Simpson told the Socialist: "The POA is here today to protest against closures. We believe that this is a knee jerk reaction by government.

"They keep telling us that that there is headroom for 6,000 [more prisoners]. We've asked them where these places are.

"Instead of closing prisons, why don't they end overcrowding? How are we supposed to take part in the 'rehabilitation revolution' when we're crowding people into prisons like warehouses? 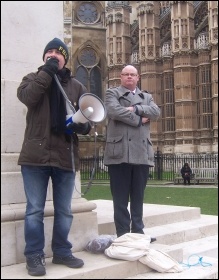 "So we've come here today and brought our comrades from the prisons that are being closed to put their case to parliament".

National Shop Stewards Network chair Rob Williams got one of the loudest cheers when he spoke of the need to unite the trade union movement in a general strike.

Rob praised the POA's 'motion five', calling for the TUC to look into the practicalities of a general strike, which was passed at last year's TUC congress.

The TUC is now carrying out a survey. Rob said: "We don't need a survey, we need them to name the date!"

This version of this article was first posted on the Socialist Party website on 13 February 2013 and may vary slightly from the version subsequently printed in The Socialist.