From The Socialist newspaper, 7 March 2013

But anti-cuts alternative still needs to be built 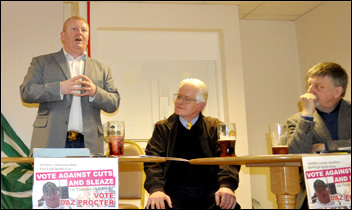 Underlining the deep economic crisis austerity has brought in cuts to jobs, benefits and living standards, the Eastleigh byelection has left Tory ringmaster Cameron with his big tent in tatters.

While the Lib Dems hung on, Labour were side-stepped into fourth with a huge protest vote emerging for the United Kingdom Independence Party (Ukip).

What does this byelection say about the state of British politics? Why did Ukip make gains?

While the Lib Dems comfort themselves for clinging on, ironically they survived only because they were seen as the best means of ensuring the Tory candidate didn't win.

They and the Tories, partners in national government, here tore strips out of each other, mobilising massive resources to do so.

The Tories distributed eight leaflets in a three-week campaign. The Lib Dems made 130,000 phone calls, and brought in 700 canvassers from across the country for the last weekend.

They shamelessly campaigned to prevent an "increased Tory presence in parliament", while propping up this rotten government of the super-rich.

As this Westminster Circus descended on the streets of Eastleigh like aliens from another planet, the mood of many was 'a plague on all of you'.

And that included Labour, testing its 'One Nation' appeal - not in a leafy suburb as some would like to describe Eastleigh, but in an area with a strong Labour history based on rail, cable, bakery, and aircraft industries as well as the Ford Transit plant.

Eastleigh has suffered from the flat-lining economy. It has a growing queue at the foodbank, not only of those on benefits but 200 over Xmas struggling to pay their mortgages and find money for food.

That Labour could not tap into the rebellious mood is a warning to the party and its right-wing trade union allies that a majority government is not in the bag for 2015. Angry workers are looking for solutions and a fightback, not vacuous rhetoric.

Into this vacuum stepped Ukip, with a message of "saving manufacturing jobs in key industries" linked to the issue of immigration.

With no challenge, especially from Labour, on the issue of jobs, Ukip was pushed to the fore, aided by the media who promoted them as the 'fourth' main party.

The result has furthered the question of a leadership challenge to Cameron, with the fading prospect of a Tory majority at the next general election.

It is mistaken however to believe that Ukip's showing represented a growth in settled support for racist anti-immigration views.

Exit survey analysis of Ukip voters showed that over 75% were casting protest votes, to send a message that they were "unhappy with all the main parties".

Earlier research on Ukip's support showed that 30% came from previous Tory voters, 30% Lib Dems, 20% Labour and 15% from those who didn't usually vote.

This was confirmed by discussions TUSC campaigners had with people who left the shop rented by Ukip and passed our campaign stall further down the street.

We gained agreement from many that bankers and the super-rich were responsible for the crisis, and that the solution was going after big-business tax dodgers to pay the deficit, not scapegoating immigrants for the crisis. A mass workers' party would have been able to cut across this turn to Ukip.

Could the outcome have been different? The byelection came at a lull in the movement against cuts, a moment where the offensive of 2011, the mass TUC demonstration and national strikes in June and November, had been halted by right-wing TUC leaders.

As hundreds face redundancy with the local Transit factory closure, what impact could have been made, for example, if those workers were in occupation of their factory with the solidarity of Ford workers across Europe?

Such a battle would have raised the standing of the trade unions as defenders against austerity and opened the possibility of the protest vote going to an anti-cuts, workers' candidate.

In Daz Procter, the RMT Southampton Shipping branch secretary and RMT executive member, Eastleigh TUSC fielded an excellent candidate with support from the RMT and a significant number of local trade union activists.

But with the shortage of time and a deliberate media blackout, referred to by Ken Loach on the election night Question Time (after the polls had closed!), we were unable to make an electoral impact.

Despite high expectations the newly-formed National Health Action Party also failed to impact, although it was granted TV and press coverage, locally and nationally in the Guardian, the Independent, and the Daily Mirror.

Reflecting the role of our candidate as a local and national anti-cuts fighter, Daz led a demonstration of over 200 in Portsmouth on 23 February.

On election day, before heading to the Eastleigh count, Daz visited his home town of Bootle where he had organised a demonstration against the hated 'bedroom tax'.

Over 1,200 attended the demo. Many then stormed the Sefton council budget setting meeting. The campaign has now declared its support for standing TUSC candidates in the local elections.

The electoral breakthrough for TUSC lies ahead in the stormy battles to come. Eastleigh shows again that many are in open revolt against the political establishment.

This time last year Respect was the vehicle for protest in Bradford West, where Ukip was heavily defeated.

In Scotland it has been the SNP, in Brighton the Greens. But all these forces will be put to the test again and again by the relentless economic crisis.

Eastleigh didn't provide the votes this time but now has a base for TUSC. Activists from the RMT, Unite, Unison, CWU and Prospect unions and Disabled People Against Cuts (DPAC) are meeting this week to discuss plans for the forthcoming May elections.

TUC must name the day for 24-hour strike

Stop cuts and privatisation, to save our NHS!