A year of opposition organised by the Socialist Students-initiated 'Scrap the Unfair Attendance Policy' campaign has forced the University of East London (UEL) to ditch its draconian attendance policy.

For an academic year, UEL students have been subject to automatic de-registration from their module if they were more than ten minutes late (later extended to 15 minutes) more than twice! But under intense pressure, UEL management gave in! 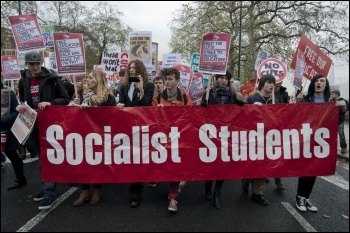 Students on the NUS national demonstration 12 November against the government attacks on university education, photo Paul Mattsson   (Click to enlarge)

The first petition on our stall demanding the policy's immediate scrapping was filled within minutes.

We held a Socialist Students meeting and then formed a joint campaign including non-members on the steering committee.

We formed an alternative attendance policy calling for 'Three Strikes and You're Out' and the ten minute tap-in limit to be abolished.

We also called for an end to automatic withdrawal of students and for lecturers to be given greater control over student withdrawals. Then we set a target of 1,000 signatures on our petition.

When we found out the date of the board of governors meeting, Socialist Students called a lobby of it to hand the vice-chancellor our petition.

This was the biggest protest since the 2010 occupation of the university.

The vice-chancellor avoided the lobby, so we sent an email demanding a meeting. They refused so we decided to hit the university where it hurt.

We leafleted an open day telling students what UEL was really like. The management (and the student union!) threw us out of the main building four times, showing they were embarrassed over their unfair and unworkable policy. And our determination!

The vice-chancellor then resigned, mainly because he had lost £1.27 million of university money to a newly built campus in Nicosia in Cyprus, which is now closed due to students not enrolling.

The next semester, we demanded to meet the new management.

They responded very quickly this time. The meeting showed how angry students were. After discussing our demands, management said: "we will take your views into consideration".

Later they came back with a comprehensive proposal scrapping 'three strikes and you're out' and stopping automatic appeals.

Many students had already felt the pain of module deregistration. Many had to try to get themselves reinstated just because they had to take their children to school.

From now on, students whose attendance drops below 75% will be subject to an investigation, but the final decision will be with the student's school and academic staff.

The student union's role in the campaign was minimal. But Socialist Students involved students who have never campaigned before and led the struggle against UEL's policy.

A weekly steering committee met to plan action and what our next steps were. We raised students' hopes that an alternative could be fought for, and won.