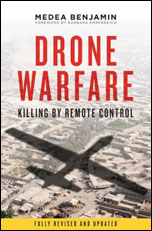 But in the world of drone wars, the ‘villain’ is Barack Obama and his ‘hideout’ an airforce base in Nevada.

In ‘Drone Warfare’, American anti-war activist Medea Benjamin has written a guide to how murder is committed by remote control, something all too familiar in Pakistan and other parts of the world.

Launched from 60 US bases around the world, they are ‘piloted’ at a distance from Creech Airforce Base, Nevada.

But the murder business has been privatised with the dirty work carried out by the mercenary firm Blackwater (now renamed the more ‘fluffy’ Academi) and others.

Most US drones have targeted Afghanistan and Pakistan, aimed at ‘beheading’ Taliban and Al-Qa’ida groups.

Leaving aside this terrible statistic, it is shocking that the ‘liberal’ Obama has publicly stated his belief that the US has the right to use drones anywhere in the world to assassinate any ‘enemy’ of the US, with no requirement for evidence or legal process.

Benjamin gives many examples of people utterly unconnected with any ‘militants’ murdered in this way.

No US troops are in harm’s way. It’s a ‘clean’ form of warfare – with the nice collateral gain of big profits for companies closely linked to government agencies.

But on the ground in Afghanistan, Pakistan, Gaza, Yemen and more, things are very different. Living under the threat of invulnerable drones must surely kindle in people an abiding hatred of those preaching about ‘democratic values’ while reserving the right to wipe out whole families without warning.

So the next time Obama proudly announces the death of an Al-Qa’ida ‘leader’, ask, was he actually a leader or just a mistake by a bored operator in Nevada? Who gave the US government the right to kill him without trial? And how many of his family, children or neighbours’ children were killed with him?