Link to this page: https://www.socialistparty.org.uk/articles/17361

Around 100 POA members at HMP Leeds held a gate meeting this morning, Thursday 5th September, to discuss yesterday's government announcement regarding the prison estate including the news that four prisons will close by the end of the financial year. The four prisons are HMPs Northallerton, Blundeston, Dorchester and Reading.

As Richard Chamberlain, POA branch chair at HMP Leeds, pointed out when he introduced the meeting, the effect of these closures will be to worsen the growing problem of overcrowding.

Most prisons are operating way above their Certified Normal Accomodation (CNA), for example HMP Leeds has a CNA of 826, but as of the last figures released by the government (February 2013) had an average population of 1,155.

As a recent POA report on prison violence points out, the prison population has been increasing almost year on year, from 43,000 in 1993 to over 86,000 in 2013 whilst staffing levels have remained static over that period.

Several POA members said during the meeting that this is potentially dangerous and was the sort of combustable conditions that led to the Strangeways riot in 1990.

Cutbacks in prisoner transport mean that prisoners arrive at an increasingly late time, so already overworked staff are forced to remain behind to keep the first night unit open.

HMP Leeds is being sent 'overflow' prisoners from the recently privatised HMP Birmingham.

HMP Birmingham had been similarly overcrowded, although now it is run by the private sector, its population has been reduced down to its CNA so as not to incur hefty charges for each additional prisoner over that baseline.

The mood of staff was very angry, with discussions about what kind of action POA members could take to resist these attacks, which the branch and the union as a whole will no doubt be discussing further. 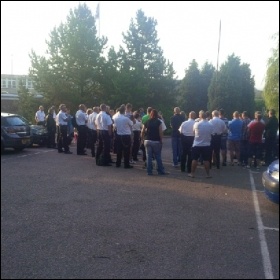 Outside Blundeston prison, 5.9.13, one of the four prisons scheduled for closure   (Click to enlarge)

POA members also walked out to hold protest meetings etc at Blunderston in Suffolk, Liverpool, Lancaster Farms, Frankland, Risley and many more prisons across the country.

This version of this article was first posted on the Socialist Party website on 5 September 2013 and may vary slightly from the version subsequently printed in The Socialist.