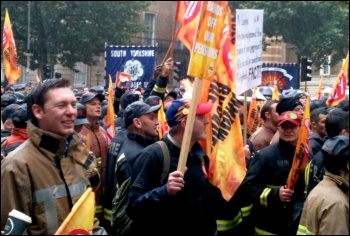 This autumn more and more workers are on the march. Or on strike. Or balloting to strike.

Postal workers are finishing their strike ballot as the Royal Mail is sold off. The posties know that in future when they are told that jobs have to go, or they have to work longer, or their wages have to be cut, it will be to maintain and grow the dividends for the fat cats.

The CWU union has got no choice but to build for the biggest strike vote and get all postal workers out.

Firefighters in the FBU are marching on Wednesday 16 October in London and striking the following Saturday for five hours.

On Thursday 17 October, the teachers are out on strike in London and across the South and North East of England.

The UCU lecturers' union, the HE members of Scottish EIS education union, Unison and Unite in higher education have all voted for strike action.

All these unions should strike together but it poses a total education strike if they can agree common dates with the NUT and NASUWT teachers' unions.

Napo's ballot also finishes this week for probation workers facing privatisation. On the 22nd, PCS's national exec meets to discuss the next stage in their action.

And finally, as the Socialist goes to press, Grangemouth oil refinery workers are preparing for a 48-hour strike to defend their shop steward Stevie Deans.

There are many other workers currently in dispute with the employers or the government.

Every worker involved in these struggles will be absolutely determined to win their own dispute and defend their pay and working conditions as well as protecting vital services from cuts and privatisation vultures.

This will also require participation in the union branches so members have democratic control of the action to see it through to victory.

On all these demonstrations, picket lines and rallies workers will also be asking the same question - why can't we strike together? We will be stronger if we do. Sometimes it is a simple question of numbers.

The Socialist Party and the National Shop Stewards Network have, with others, been campaigning for the TUC and the unions to call a 24-hour general strike as the mass action necessary to face down the Con-Dem austerity offensive.

If the unions who are currently in dispute strike together, over a million workers would be out on the same day - a massive step in the right direction.

It would give a huge boost of confidence to these workers but to the many millions watching on, including the increasing number suffering from these brutal cuts.

On 30 June 2011, 750,000 civil servants, teachers and lecturers from PCS, NUT, UCU and ATL walked out on strike together to defend their pensions.

It paved the way for the massive two million-strong N30 strike of nearly 30 unions later that year. It could and should have been the beginning of the mass joint strike action that could have shaken the Con-Dems and even defeated them.

Unfortunately, it was stopped in its tracks by the TUC leadership and right-wing union leaders. But the cuts are escalating, with a promise from the Tory conference of austerity until 2020 unless we stop them.

And the anger is building again. It's time to make our demand for action on our side even louder: name the date for a 24-hour general strike!

See www.shopstewards.net for more info and to subscribe to the weekly newsletter