Link to this page: https://www.socialistparty.org.uk/articles/17598 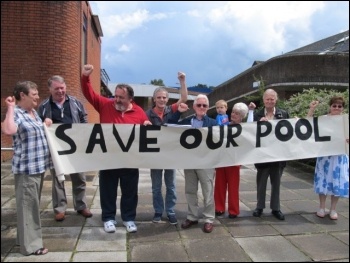 Coxteth councillors Keith and Don campaigning with others to save Oaklands pool, Southampton, photo Southampton SP   (Click to enlarge)

In May 2012 Southampton voted Labour overwhelmingly in the hope of ending the misery meted out by the Tory-led council. Southampton's council staff had fought hard to defend their pay and conditions and Labour had a mandate from the people of Southampton to protect local public services and jobs.

The new administration, however, showed it intended to carry on with the Con-Dems’ dirty work. Within months the then Coxford ward Labour councillors Keith Morrell and Don Thomas were suspended and then expelled from Southampton council Labour group for the ‘crime’ of opposing the closure of a swimming pool.

Their stand received enormous support from the local community and across the city. They also received the backing of local council trade unions.

Having set up a new group in 2012, Southampton Councillors Against Cuts, Don and Keith can now report on an important campaign victory:

Under intense pressure from the 'Save Oaklands Pool' campaign, Southampton Labour council has been forced to agree to refurbish and re-open the swimming pool.

A hold has been put on the planned demolition of the pool building and £1.25 million earmarked to do it up.

Everyone involved in the 'Save Oaklands Pool' campaign - users and staff, local residents, community groups, the trades unions representing council workers, and members of the Socialist Party - deserve recognition for what they have achieved.

That recognition is being shamefully denied to them by Labour councillors, who closed the pool in the first place, and who now want to take all the credit for "saving" it!

We should remind everyone that last year the council leader said, "Oaklands pool is closed and will stay closed.

"Get used to it!" But we refused to "get used to it" and the campaign to save the pool from demolition began.

If it wasn't for the Oaklands pool campaign the building would have been demolished long ago, it was only the hard work of all of the above that forced Labour to rethink, finally doing a U-Turn. Now we need to get Oaklands swimming pool open as soon as possible.

We demanded right at the beginning of the campaign that the Labour administration use some of the money it will get from selling the school site on re-opening the boarded-up swimming pool and giving it a major refurbishment. That demand has now, at long last, been adopted!

However the Labour council is still refusing to take responsibility for the day-to-day running of the pool and is instead trying to push that huge task onto a voluntary community group to do the job for them, leaving former council workers at the pool out of their jobs.

We have always had reservations about the viability of this arrangement and believe the council should run the pool.

Now the decision's been made, the council should go full steam ahead and not waste any more time. Campaigners will continue to put on pressure to get work started immediately.

Keith and Don have proved in action that councillors do have a choice - it is possible for them to refuse to implement the cuts, as the Trade Unionist and Socialist Coalition has always argued.

They now sit on the TUSC steering committee and participate in the campaign to build a political alternative to all the austerity parties.

This version of this article was first posted on the Socialist Party website on 22 October 2013 and may vary slightly from the version subsequently printed in The Socialist.