Link to this page: https://www.socialistparty.org.uk/articles/17946 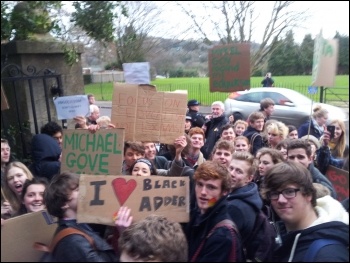 Education minister Michael Gove recently accused 'left wing academics' of using Blackadder Goes Forth as propaganda in the teaching of the First World War. On reflection, he may regret his decision to visit the school of a former pupil who played the part of one of the characters, Captain Darling.

Current Stroud school students angry at gormless Gove's education policies, chased him for over an hour around Marling, a Gloucestershire grammar school that recently benefitted from a £3.7 million refurbishment. "Education shouldn't be elitist, it should be for everyone, that's why I'm protesting" said Janneke Bax-Pratt.

Hundreds of students were waiting for one of the most despised members of the coalition cabinet. He was left cowering in a classroom with a few officials and the local Tory MP, while students circled the building chanting 'Gove out'.

A handful of teachers tried to hold back students from getting too close to Gove, but were brushed aside by a wave of young people determined to make their anger heard. Other teachers clapped or smiled as Gove was hounded. Several agreed with Socialist Party members who suggested building support with students for their next industrial action against attacks on pay and conditions.

Janneke spoke for many when she said: "Gove is pathetic and cowardly; he should have the guts to come out and speak to ordinary students. I'd like to know if he's making visits to any comprehensives in the area". Will, a sixth-former at Marling school, added: "why doesn't Gove take a cut out of his own salary instead of cutting education and our future".

The coalition government is continuing the dismantling of comprehensive education and replacing it with a tiered elitist system based on ever more testing. Education will be increasingly about teaching students to regurgitate facts for exams. Those in power see no point in spending resources on a decent education for all young people when there will not be enough decent jobs needing highly qualified people. Free Schools and Academies are a way of taking schools out of local authority control and for the private sector to further get their claws into the education system.

Teachers face attacks on pay through divisive performance-related pay and a squeeze on pensions, while workloads and stress increase. Further strike action this year by teachers could get wide support from students and could be part of coordinated industrial action with other trade unions, building to a 24-hour general strike.

This version of this article was first posted on the Socialist Party website on 13 January 2014 and may vary slightly from the version subsequently printed in The Socialist.

Gloucestershire Socialist Party: Fighting austerity - March together and Fight together

Stroud Socialist Party: After 30th November, how can we defeat the cuts?