Link to this page: https://www.socialistparty.org.uk/articles/18231 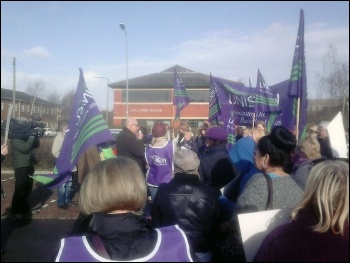 "Cowardly company of carpet-baggers" is how Unison full-time officer Jim Bell described Care UK, the private company that is tearing up the terms and conditions of around 200 care staff in Doncaster. "They're not used to dealing with trade unions."

Well, they're meeting their match now! Well over 100 Unison members, having twice voted by over 90% for industrial action, held a protest picket outside Care UK's Doncaster office on the first day of seven days of continuous strike action. With flags flying, placards raised and whistles blowing, strikers demonstrated that they are not prepared to let Care UK walk all over them.

Within 90 days of winning the tender for Doncaster's learning disability supported-living service, Care UK has torn up the TUPE agreement and is axing enhanced payments for unsociable hours worked. Due to the nature of the job this means staff losing as much as 50% of their pay, as much as £7,000 a year and on average £440 a month. Workers are being threatened with dismissal and re-engagement on these worse terms if they don't accept by 21 March.

No one ever wants to take strike action but even more so for care workers whose service users are not only vulnerable people but "part of the family". But staff are already leaving because they can't afford to live with such drastic pay cuts. So this strike is to defend the service as well. 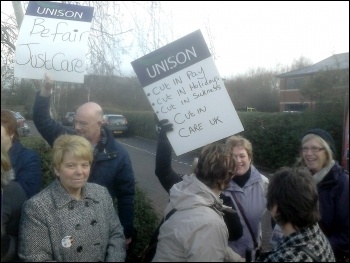 But Care UK doesn't care. They've brought in staff from as far as Grimsby and Stoke, put them up in a hotel and paid for taxis, to try to break this strike and say a normal service is operating. Well it's not. Not when these "staff" don't know the service users, haven't been trained, CRB checked or had their jabs. There has already been an incident where an epileptic man had a seizure because there weren't any trained staff to administer his medication and the paramedics had to be called.

Make no mistake, these care workers, mainly women, are very determined and will be back protesting outside Care UK offices again tomorrow morning.

This version of this article was first posted on the Socialist Party website on 27 February 2014 and may vary slightly from the version subsequently printed in The Socialist.