Editorial from the Socialist issue 801 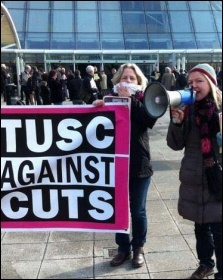 After a conference that lasted just two hours... it was gone! Labour's Saturday 1 March special conference actually took place in the very constituency where Kier Hardie, the first Independent Labour Member of Parliament, was first elected in 1892.

But by adopting the Collins Review, Labour effectively ended any lingering pretence of an organised trade union presence in the party that the unions created over a century ago.

But union members will be exasperated at the apparently relentless denial of the union leaders at what Collins represents. Incredibly, because of their support for Collins, there was bigger opposition among delegates from the threadbare constituency section than the unions!

Saturday's conference is the end of a process of transforming Labour into yet another mainstream pro-market party that started with Kinnock expelling Militant, Smith bringing in 'one member one vote' and Blair ditching the socialist Clause 4.

The Labour leadership wants to finally cut off all avenues for internal opposition should they come to government, even from the tame party that now exists.

It also cannot be separated from Miliband shamefully calling in the police to undemocratically undermine the Falkirk parliamentary selection contest because Unite had been successful in recruiting new members to the party - the party it donates £3 million a year to! Len McCluskey reportedly got a rousing reception from delegates when he called for support for sacked Ineos convenor Stevie Deans. They had, however, also given a standing ovation to Miliband.

But the starting point for Stevie's dismissal was Miliband's attack on him at Falkirk where he was the constituency chair! Scandalously, Stevie's fellow convenor Mark Lyons, the national vice-chair of Unite has also now been sacked.

Yet Len can say: "My union was one of the first to embrace the principle of reform when Ed Miliband proposed it last summer..."

GMB leader Paul Kenny, who last autumn was standing out in opposition to Miliband said: "My union will be supporting these proposals wholeheartedly... trying our damndest to make them work."

And in an article entitled, 'We are grabbing this opportunity with both hands', Unite's political director Jennie Formby promises: "The hard work begins now.

"During the course of the five year transition proposed by Collins, Unite will be striving to persuade our members that there is a place for them in the Labour party."

What is this based on? Jennie writes: "People want a manifesto that gives expression to their hopes and offers real change to build a strong economy and a fairer society.

"So Ed, an appeal - release your inner radical, tell us more about how you will deliver the jobs, homes and hope our country needs so we really can persuade the 6.4 million trade unionists, the ordinary men and women who are the backbone of our country, that Labour is their party."

Jennie Formby's article only brought exasperation from Unite members who reflect many members' feelings: "It's no longer 'our party'.

Ordinary members have little say over policy. The elite do as they please, as happened in the many stitch-ups for safe parliamentary seats and as happened at Falkirk... Policy shouldn't be a matter of pleading with Ed to release his 'inner radical'."

As the Socialist has pointed out many times, both Eds have already told us that they accept Tory austerity - and capitalism! The day after the special conference, New Labour education spokesman Tristram Hunt was on BBC confirming that Labour will retain Michael Gove's schools policies such as Free Schools and accelerated academisation: "I don't think you want to waste political energy by undoing reforms that, in certain situations, build rather successfully on Labour policy."

It is also revealing that Tony Blair praised Miliband and even 'Dr Death' David Owen, the key traitor who left Labour to set up the SDP, has publicly announced a financial donation to Labour precisely because Collins was passed - by your friends will you be known!

A new party based on the unions, with their resources on an unashamedly fighting anti-cuts programme could absolutely transform UK politics.

Even in the short term it would have more effect on Labour policies than the capitulation by the union leaders at this conference.

As Hunt's comments shows, all that has been achieved is to embolden the most right-wing elements in Labour.

Instead of wasting yet more members' subs on trying to convince them to join pro-austerity Labour, many union activists understand that there now has to be a debate and discussion about how a new mass party can be formed that stands full square against austerity and for trade union rights.

There would be outrage from members if their leaders bow to pressure and reduce the affiliation they donate to Labour yet merely give it through the backdoor in donations.

The great majority of the union leaders complied with Collins because they are afraid to draw the necessary conclusions from what these changes mean.

They should look to France where Miliband's equivalent, François Hollande has pursued vicious austerity.

He has disappointed the working class completely and is officially the most unpopular president in the history of the fifth republic.

In the US the unions have funded Obama and the Democrats but significant sections are starting to work with the left, including Socialist Alternative, in the fight for a $15 an hour minimum wage.

And they should look to South Africa where the working class in struggle is drawing conclusions and taking important steps in building a new mass political voice.

Here the Trade Unionist and Socialist Coalition is planning the biggest left of Labour stand in generations and already involves the RMT and key trade union fighters. Join the fight for a working class political voice by getting involved today.