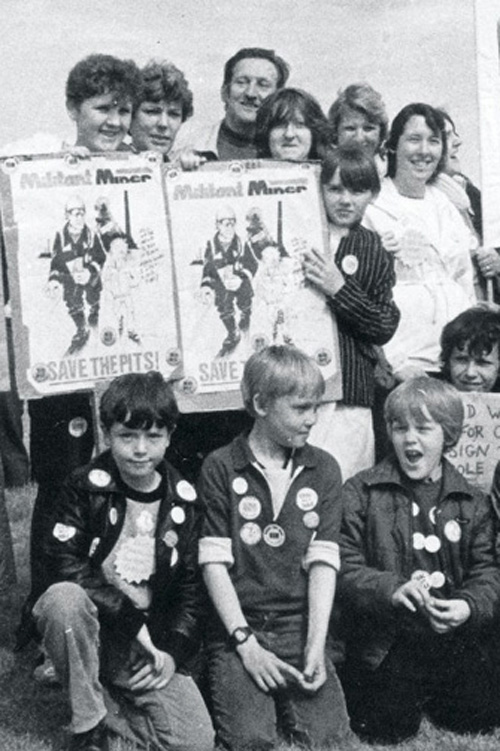 As part of a series of articles celebrating the 30th anniversary of the 1984 miners’ strike, we have two reminiscences by ex-miners who were among the 500 miners who joined the Militant, the forerunner of the Socialist Party.

Ian Whitehouse was in Yorkshire, one of the strongest areas of the strike. Steve Minney was one of a brave minority of Nottinghamshire miners who were on strike.

We fought with every means 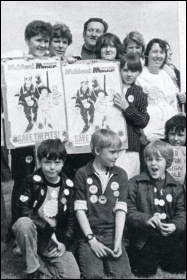 Miners and their families during the 1984-5 strike, photo D Pearson   (Click to enlarge: opens in new window)

I left school in 1979, the year Thatcher came to power. It wasn’t the last time our paths crossed. After an apprenticeship with the National Coal Board at Highmoor colliery, by 1984 I was a qualified underground maintenance fitter working on coalface machinery.

I was looking forward to marrying my girlfriend, getting a house and starting a family.

I thought I had a secure future. The NUM miners’ union was the vanguard of the working class. The government took us on at their peril, as they discovered in 1972 and 1974.

One day shift, on entering the canteen, our branch secretary Austin Fairhurst introduced us to four flying pickets from Cortonwood, the first Yorkshire pit threatened with closure without going through the consultation procedure.

Within minutes we had a unanimous show of hands. That was the last time I went through Highmoor’s gates for a year.

We knew it would be hard fighting the government but we didn’t realise we would also have to do battle with the leadership of the Labour Party and the TUC.

Many people came up trumps, people like Sharon from my Socialist Party branch who went around Sheffield’s pubs, shaking a tin, collecting money for the miners.

Or the pensioner who sent in a fiver a week from her pension that she couldn’t really afford. These people keep you going.

We had laughs. At one private mine that was still turning coal, we got into the offices. My mate picked up a phone and threw it through the window.

Suddenly someone shouts ‘what about fingerprints?’ My mate says, bloody hell yes, and wipes his hands on his shirt.

The police were at best obstructive and at worst like storm troopers. If the tactics used to stop ordinary people moving around the country were employed in any other country the British government would be up in arms about restricting people’s human rights but it’s different for the ‘enemy within’.

We fought with every means we could but were totally up against it without the support of the Labour Party and TUC.

They should bow their heads in shame. The working class have had zero-hour contracts, lost paid holidays and sick pay all due to the weakening of unions’ standing in the workplace.

Big positives came out of the miners’ strike. The ‘Women Against Pit Closures’ movement empowered women of the coalfields to express their drive and commitment to the cause and go on later to further education and to fulfil their ambitions in many ways.

The strike, though, took its toll on relationships. People were evicted from their homes. Families were split with strikers and scabs in the same villages.

At the end we went back marching behind banners and bands. Some said it made them proud to see it, but for me every step was forced, every minute of the march took an hour. It seemed the vanguard had become the vanquished.

So what can we do in the future? Little things help people get through industrial action. Go up to picket lines and give your support.

Write to local papers to support comrades on strike. Don’t cross picket lines even if it’s not your dispute, even a blast on a car horn as you pass a picket line helps.

The Tories, with the help of Labour’s leadership, shut pits, ripped the heart from communities and stripped pride from the people. Don’t let it happen to anyone else. La lutte continue!

In 1984 I was a naive 19 year old working at Hucknall mine in the Nottinghamshire coalfield. I’d already been at a union school where branch officials brought guests from the South Wales area.

So the talk was about the destruction the Tory government was planning on the coal industry.

In March 1984 the Broad Left of Notts NUM organised a meeting which agreed to place a picket on the nightshift at various Notts pits in support of the Yorkshire area.

Police were flown in from Hampshire and Manchester, then the Met came. The county of Notts became a siege location where major roads inward were patrolled especially in the north of the county to stop flying pickets.

Any car suspected of carrying a picket, especially a male occupant, would be turned back. The Met police, with no attachment to the area or people, would not hold back with their aggressive actions. 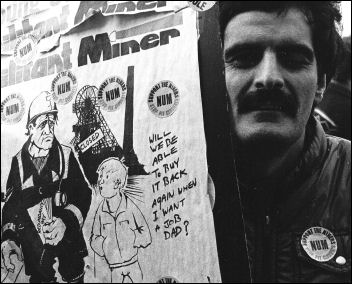 Miner lobbying the TUC during the Miners strike of 1984-85, photo Dave Sinclair

In Yorkshire the NUM could use welfare facilities as their area backed the strike. In Notts we had to organise in a pub where the landlord supported us.

The strikers’ first meeting organised a committee to collect finance for strikers in 18 pits where the majority worked.

An area strike committee, along with other unions, organised financial aid and donations of food and other household items.

At Linby mine, the local Labour Party let us use their building to hold meetings, a soup kitchen and a central location during the strike.

That wouldn’t happen in Labour today. A financial hardship committee was set up as striking miners were not entitled to any benefit, only living through donations.

People in the Nottingham Building Society were threatened with eviction due to non-payment whereas building societies in Yorkshire, where a good majority were on strike, showed them more leniency.

Notts area NUM had a history of scabbing against the national union due to the union being run on federal lines.

The Thatcher government’s policy was to maintain production of coal in the Notts area while bringing foreign coal into the country.

At the docks members from other unions would not unload coal or transport it on trains and some faced the sack for this action.

The Tory government sent its agents into Notts to orchestrate a working miners’ committee. They wanted to sway public reaction that these people were being intimidated into not crossing picket lines.

At area level officials were wined and dined to speak out against the strike but the main objective was to cause a breakaway union as had happened in Notts in the 1920s.

The 1984 strike saw the formation of the scab Union of Democratic Miners (UDM). The courts ruled that anyone who wanted to be in the NUM had to sign out of the scab union. All the Notts NUM property and buildings went straight to this rabble.

Over the years documents have been released on the 1984 miners’ strike. Recently we heard that the government used the Army to transport coal.

The figures of miners returning to work were falsified. I remember watching the news saying the figures were going up ‘about 500 today and 12,000 for the week’. In spring 1985, the union voted to return to work without agreement.

Sadly we now find out how close we were to victory. At the beginning of the strike 20% of Notts miners were out on strike, at the end there were 22%.

This shows striking Notts NUM members’ commitment to their union keeping their livelihoods and communities.

Since the strike Nottinghamshire towns have become ghost towns. When we meet up I have never heard one regret from those on strike in 1984. 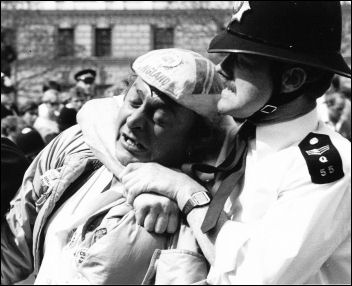 The Socialist Party’s history of the 1984-85 miners’ strike, A Civil War Without Guns, by Ken Smith, has been reprinted with a new introduction for the 30th anniversary of this colossal struggle.

The Battle of Orgreave

Film ‘The Battle of Orgreave’, followed by a discussion on the theme: Fighting then! Fighting against cuts! Fighting for justice!