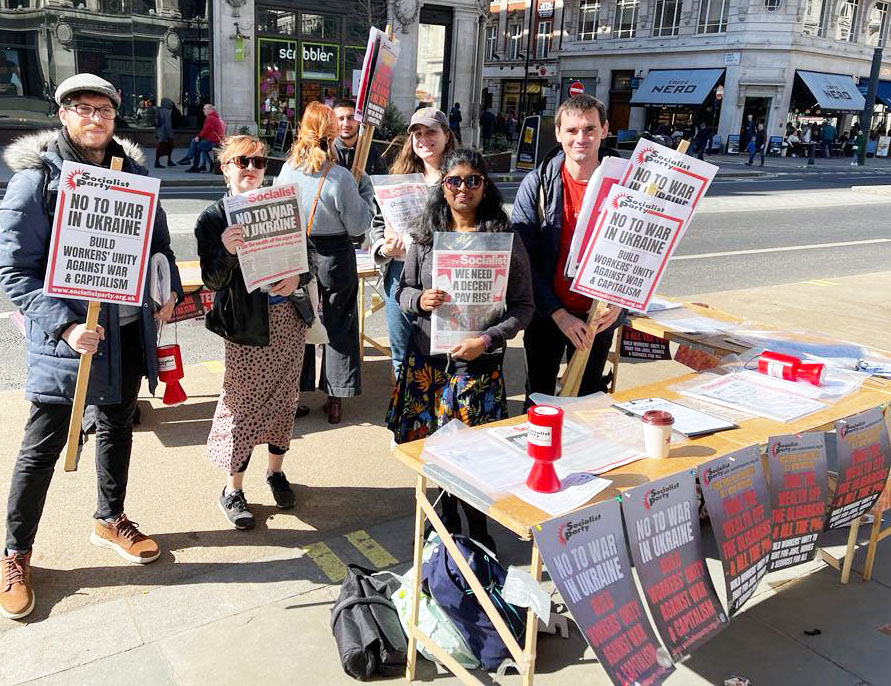 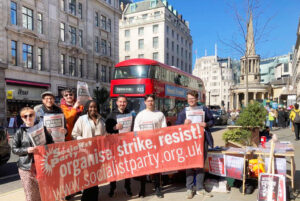 The Socialist Party has a long and proud record of struggling to defend working class people. We are involved in many campaigns throughout England and Wales, and support many others internationally.

We participate in anti-war demonstrations, and say:

During the height of the Covid-19 pandemic Socialist Party members were involved in many campaigns for health and safety, and for the full protection of pay, jobs and homes. Our demands included:

Socialist analysis on Corbynism and Labour

Some of our articles and analysis:

In the 2017 snap general election Jeremy Corbyn enthused millions of workers and young people. Labour gained 3.5 million votes, including a million who had previously voted Ukip. The potential existed to build on that by promoting a socialist platform, offering a real alternative to austerity.

Unfortunately however, during Jeremy Corbyn’s time as Labour leader, at every stage the Corbyn wing was prepared to make concessions to the pro-capitalist Labour right wing in the vain hope of pacifying them.

The suspension of Jeremy Corbyn under Keir Starmer’s leadership has shown the determination of Starmer to annihilate the last vestiges of ‘Corbynism’- as the Socialist Party warned would be the case.

Labour councils have continued to privatise, close and cut vital services, jobs and pay. Rather than taking a stand against Tory government cuts in funding, they do the bidding of the government. They shouldn’t be making any cuts, and their plans should go further, to include mass council house building and measures such as rent control in the private sector.

Labour-led councils have billions of pounds in general reserves. These funds, along with using their powers to borrow money, could enable the implementation of no-cuts budgets, while launching a struggle to demand sufficient funding from the government.

Unfortunately, however, Labour councils under Starmer will not follow this road and are  continuing to cut already decimated services, plus workers’ pay and conditions.

That is why Socialist Party members have moved resolutions in their trade union branches up and down the country to encourage branch members “to consider standing as anti-cuts candidates in the council elections scheduled for May 2022”, and pointing out that the Trade Unionist and Socialist Coalition (TUSC) is a banner under which they can stand (see below).

We are constantly involved in the struggles of trade unions and trade unionists against attacks by the government and private sector employers on workers’ pay, jobs, pensions, and terms and conditions.

While still mainly localised and at a relatively low level compared to the 1970s and 1980s, the strike wave in late 2021 and early 2022 has seen some intensive action, with many strikes being ‘indefinite’. Bus workers in Manchester and British Gas workers took 85 and 43 days of strike action respectively against ‘fire and rehire’ in 2021.

Also, there is a rising wave of disputes over pay, many of which have been in haulage, refuse and bins.

Also, in this period of capitalist crises, militant industrial struggle must be joined with a socialist political programme to face up to the scale of the challenges facing workers, both in the workplace and their communities.

We play a leading role in building the National Shop Stewards Network (NSSN, http://shopstewards.net/), which helps workers in struggle at rank and file level. It has played a key role in mobilising pressure on the trade union leaders to organise more – and more widespread – coordinated action against government austerity measures. 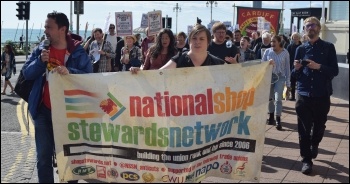 The NSSN in Brighton lobbying the TUC, 8.9.19. photo Mary Finch

Many of our members are workplace trade union representatives and some have been elected onto higher bodies in their union, including onto the national executive committees of Unison, NEU and RMT.

From May 2011 we stood in local elections as part of the Trade Unionist and Socialist Coalition (TUSC) every year until 2018,  and then again from 2021, and also in the 2010 and 2015 general elections

TUSC stood sufficient candidates in the 2015 general election to qualify for a UK-wide party election broadcast.

TUSC was co-founded in 2010 by the late Bob Crow, the RMT transport workers’ union leader. Its first steering committee included the Socialist Party and we have participated in the committee ever since. In 2012 the RMT decided to be represented officially on the committee. Along with the RMT, its steering committee today involves leading trade unionists from other unions together with the Socialist Party, the Resistance Movement, and independent socialists.

TUSC recalibrated its electoral activity following Jeremy Corbyn’s election as Labour leader, a development which it warmly welcomed. Consequently TUSC did not contest either the 2017 or 2019 general elections and only stood in other elections against those Labour candidates who opposed Jeremy Corbyn and were carrying out austerity policies.

In the May 2019 local elections we stood under our registered electoral name Socialist Alternative. But with Keir Starmer’s election as leader TUSC agreed to resume standing candidates from May 2021.

In the May 2022 local elections TUSC stood in the English council elections across 53 local authorities, plus three mayoral candidates, and there were candidates in nine councils in Scotland and five authorities in Wales.

TUSC stands for public ownership, not cuts and privatisation; jobs, not handouts to the bankers; the repeal of the anti-trade union laws, protection of the environment, decent pensions, and democratic rights. It presents the case for a democratic socialist society run in the interests of the people not the millionaires. 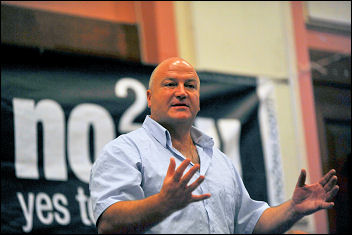 In the June 2009 and May 2014 European elections we were part of the trade union-led No2EU – Yes to Democracy campaign.

In the 23rd June 2016 European Union referendum, the Socialist Party called for a ‘Leave’ vote, because we oppose the bosses’ club that the EU is in reality. We fight for the interests of ordinary people in Britain and across Europe – which would be for a voluntary, democratic, socialist confederation of Europe.

We oppose the EU from a completely different class standpoint to that of the pro-big business Ukip and the Tory ‘outers’.

A ‘Leave’ vote was also an opportunity to pass verdict on Cameron and his rotten government. Cameron had to go as a result of that verdict – now let’s remove all the Tories from power!

Between 1983 and 1992, as part of the Labour Party, we had three socialist MPs – Dave Nellist, Terry Fields and Pat Wall – who lived on the average wage of the workers they  represented.

They never forgot their working-class roots or the problems of those who elected them – unlike many political and trade union leaders who live on inflated salaries.

We have also had Socialist Party councillors elected to serve terms of office representing the working class: Dave Nellist, Rob Windsor and Karen McKay in Coventry; and Ian Page and Chris Flood in Lewisham.
In 2006 in Huddersfield, Socialist Party member Dr Jackie Grunsell also won a council seat – with a majority of over 700 – standing as a ‘Save Huddersfield’s NHS’ candidate. 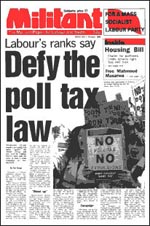 Over two decades ago we were known as the Militant Tendency and campaigned in the Labour Party for socialist policies.

We led Liverpool City council’s battle in the mid 1980s for decent housing, jobs and services, and later were leaders in the battle to defeat Tory Prime Minister Margaret Thatcher’s poll tax which forced her to resign.

We outline below some of the other campaigns and organisations that Socialist Party members are involved in.

If you want to find out more or get involved click here.

Socialist Students campaigns against university tuition fees, against cuts in funding for higher education, for the restoration of a living grant and on many other issues. 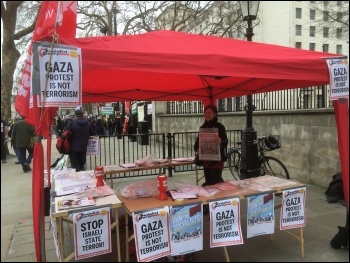 The Socialist Party opposed the invasions and occupations of Iraq and Afghanistan and called for the immediate withdrawal of foreign troops. We have been actively involved in many other anti-war campaigns and protests, including against the war in Ukraine, and against Israeli military onslaughts on Gaza.

We have been involved in many campaigns to stop hospital and ward closures around the country, and against the ongoing privatisation of health services. Read our NHS campaign articles.

The Socialist carries many reports on health workers’ struggles against low pay and privatisation, some led by Socialist Party members.

Capitalism is literally destroying the planet. We participate in many campaigns and protests against this destruction and put forward the necessity of a socialist alternative to stop and reverse Climate Change.

Socialist Party members also regularly participate in demonstrations on many other environmental issues; including anti-fracking, for flood defences, against toxic waste incinerators and against nuclear power. Click here for articles. 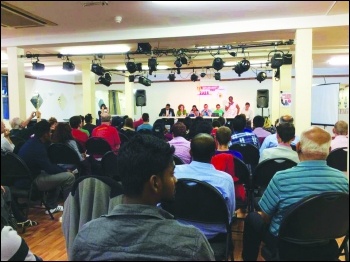 Click here to read some of our articles on defending equality and the rights of Black and Asian people. 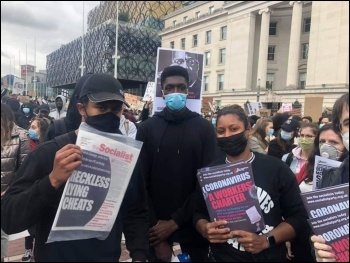 On a BLM protest in Birmingham, June 2020

We were involved in campaigning against the war in Sri Lanka and helping to build the organisation Tamil Solidarity in Britain (www.tamilsolidarity.org).

We have been involved in many campaigns against racism and neo-fascism, including demonstrations against the far-right English Defence League and BNP, as well as in other anti-racist activities – such as against discriminatory harassment and brutality by the police.

Across the country we have been involved in campaigns against home evictions, the privatisation of council housing, for rent caps, repairs and improvements and on many other issues.
We call for a massive building programme of publicly owned housing, on an environmentally sustainable basis, to provide good quality homes with low rents. 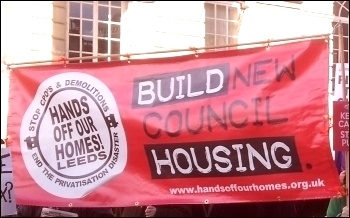 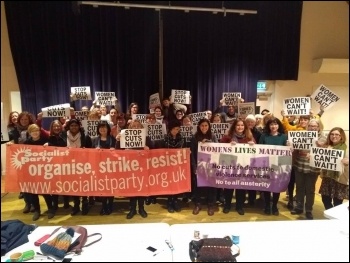 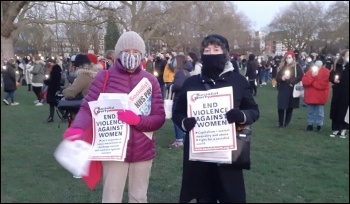 Socialist Party members in Hackney on a vigil following the murder of Sarah Everard, London 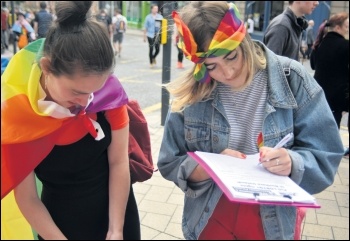 Our LGBT Group is involved in campaigns against anti-gay discrimination and for civil rights for all. Click here for articles.

Socialist Party members were involved in the initiative to set up Youth against Racism in Europe (YRE)in 1992. Involving thousands of young people, it co-organised a demonstration in 1993 of 50,000 people to demand the closure of the Nazi BNP’s HQ. 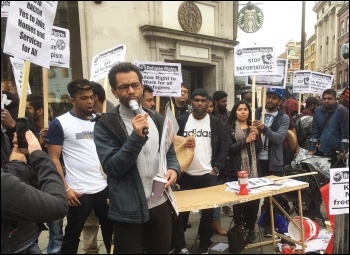 The Socialist Party works both independently and with other groups to fight all racism, prejudice and discrimination.

When the far-right try to march or demonstrate, we are involved in organising counter-demonstrations, uniting local communities to stop them.

16/05/2021
The Socialist Party fights for socialism – a democratic society run for the needs of all and not the profits of a few. We also oppose every cut, fighting in our day-to-day campaigning for every possible improvement for working class people...
We use cookies on our website to give you the most relevant experience by remembering your preferences and repeat visits. By clicking “Accept All”, you consent to the use of ALL the cookies. However, you may visit "Cookie Settings" to provide a controlled consent.
Cookie SettingsAccept All
Manage consent