Link to this page: https://www.socialistparty.org.uk/articles/18768 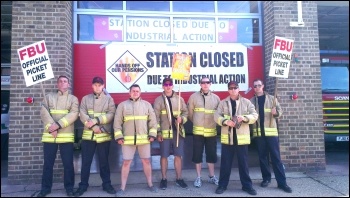 Leicester: There was great support in the sunshine at Western Fire Station, New Parks, Leicester from local people this morning. The 24-hour action by firefighters is the longest so far in this dispute, but one passer-by suggested that maybe they need to stay out for longer to force the government to listen. The pickets agreed, saying that they need to ramp up the pressure.
They were also hopeful that they would be out on 10 July to join the potential 1.5 million other workers on strike that day.
There is to be a open air rally in the city centre at lunchtime, a new departure for the FBU in Leicester. Socialist Party members will be there in support. 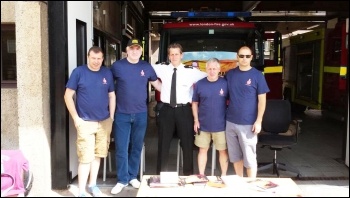 Fire Brigades Union members are striking again today against attacks on their pension scheme which will mean they pay £4,000 more for the same or a worse pension.

Making matters worse, the same attacks from fire minister Brandon Lewis mean firefighters towards the end of their working lives will be drummed out on 'capability' grounds for being physically unable to do the job of a 20-year-old!

"At the moment the only thing on the table is the original offer that first came out, they've reverted to the original modified pension scheme with no enhancements etc. Any gains made by the FBU over the last few months have gone. We're open to negotiations any time, but alternative proposals looked at by the employers' side and costed by GAD (Government Actuaries Department) haven't been shown to the FBU so we can't have an opinion on them.

If there's no movement in talks, personally I think the next strike should be for 48 hours, moving in stages of progression of further and further action and seeing how they're coping. Ultimately, it's walking out the door until something happens, and if there's no progress then I honestly believe the members would support that.

And there needs to be more coordination. The 10th July date is ideal because it's far enough away to give time for something to develop, but if it doesn't then I think the FBU leadership should be using that date or part of it to name the next strike for 48 hours." 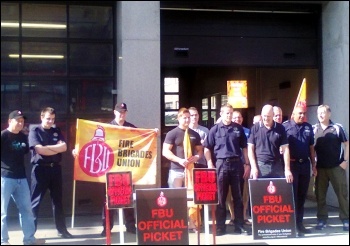 Nottingham firefighters on strike, 12.6.14. Nottinghamshire Fire Authority is planning £2.4 million worth of cuts. photo by Becci Heagney   (Click to enlarge)

Brigade management are supposed to be neutral in this dispute, or at least they say they are and blame the government. But in reality they're firmly on the government's side. Firefighters have been banned from attending today's Manchester strike rally in uniform, a condition usually applied to serving military personnel!

Preferential treatment is being given to the hastily half-trained scab crews, as they are receiving camp-beds for night shifts. Beds for night-shift firefighters in Greater Manchester were withdrawn years ago and replaced with chairs. These double-standards are enraging FBU members.

Scabs who dream of becoming firefighters are in for a shock though, because not only will the brigade management not even consider lifting the current recruitment freeze until 2017 but 10% of operational firefighters' jobs (around 100 posts) are due to be cut 'over the next few years'.

Instead of taking on more staff, the 'additional hours' policy unfortunately agreed to by the FBU's Greater Manchester brigade committee will be used to force existing firefighters into working more and more overtime without being paid more than a flat-rate for doing it.
This is all about money-saving by management, and should have been rejected by the brigade committee or at least put to a vote of all the members. Management themselves have admitted that FBU intransigence could have blocked this scheme. That could have defended then-existing pay policies and broken the recruitment freeze.

Money is no object when it comes to privatisation though. The long-running saga of centralising fire control across the north-west into a privatised regional fire control centre culminated last week when it opened. This £400 million white elephant is in trouble already! Management call it 'teething problems' with 'unexpected call volumes', but when fire control for the whole region is supposed to be provided by the same number of staff as previously worked for Greater Manchester alone, obviously they won't be able to handle the workload!

The control centre is owned by a company owned by local authorities, and rumours are already swirling of jobs-for-the-boys appointments to the company board. 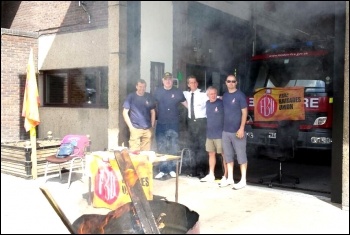 Endless employers' attacks face firefighters in Greater Manchester and many other parts of the country. Cuts, closures and privatisation mean job losses and an inferior service.

Increasing bullying and victimisation, under the guise of 'capability' and 'fitness' assessments are used to hound serving firefighters out of a job, even if they're sick in the first place because they were seriously injured while doing their job.

The public will pay the price for all this unless these vicious policies are withdrawn by management. That will mean a serious struggle by the FBU, linked with discussion on how to develop political representation for firefighters, an urgent issue when Labour-run fire authorities stick the boot into FBU members just as hard as Brandon Lewis and his Tory/Liberal chums.

Escalating the fight over pensions to more prolonged strikes interspersed with more periods of action 'short of' strike, coordinated with other unions where possible, is the best way of boosting FBU members' confidence to fight all the other attacks and develop a strategy to defend our fire service and the workers who provide it. 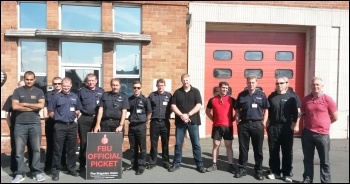 An FBU rep at Thornhill station in Southampton spoke to Declan Clune:

"We have to stand up to bully boy tactics from this government. Our union has put forward proposals that the government will not address.

"Why not? It shows they don't want to negotiate. They want to smash the FBU and undermine the professionalism of the fire service and safety of the public.

"They want a make-do service that will then be ripe for privatisation to firms like Serco, looking to turn a profit.

"This is a skilled job, built up by experience and years of service. Attacking our pension will undermine that, and turn firefighting into a transient job".

It is vital these issues are explained to the public and support is built to protect firefighters' jobs, terms and conditions as well as stopping cuts to the service itself.

This version of this article was first posted on the Socialist Party website on 12 June 2014 and may vary slightly from the version subsequently printed in The Socialist.