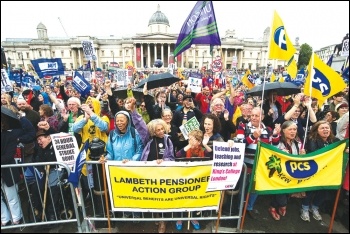 "Work should pay, not keep you in poverty." After 10 July no one could be in any doubt that low pay is a major issue in Britain. The Financial Times (FT) quoted striker Barbara Plan, 57, a teaching assistant in Lewisham (11/7/14). Some of her colleagues are working three jobs in schools, as cleaners, teaching assistants and midday meal supervisors "just to keep up with the pay to make a living wage, you ... shouldn't have to go to work to then have your pay topped up with benefits."

Over one million workers are reported to have participated as schools and public services shut down for the day. The Evening Standard's resentful report indicated the strike's success: "In the worst-hit areas of London almost every school was affected, including Enfield where seven schools were open and 76 shut. In Barnet just five secondary schools were fully open while 16 were shut or partly shut."

The reports on the Socialist Party website give a taste of the enormous support for the fight against low pay, including from the general public and private sector workers, and the mood for further action. It is also clear that workers must get organised to make that a reality.

We support the public sector unions' call for an increase of £1 an hour to end the pay freeze. This will not be enough, however, to lift the lowest paid out of poverty. Socialist Party members found huge enthusiasm among strikers and the public for our demand for a £10 minimum wage.

Fuelling the rage and the mood to fight on, no doubt, will be the news that executive pay has grown to almost 180 times that of the average worker. The FT's detailed report indicates it is warning its big business readers that an explosion of anger over low pay is on the cards.

We call for an escalation of the coordinated action, building towards a 24-hour general strike. The National Shop Stewards Network, at its annual meeting the previous week, made the issue of pay central and reiterated the urgent and ongoing need for activists to build pressure on the trade union leaders for more generalised action.

Following a lively and impressive march of London workers in the nine trade unions on strike, the Trafalgar Square rally opened with its chairperson, president of South East TUC Martin Gould, declaring it to be nationally the second biggest public sector strike since World War Two. 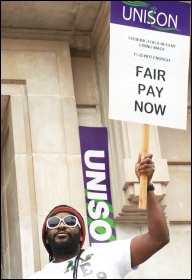 All the platform speakers described well the plight of low-paid and over-worked public sector workers. A number of them echoed the mood of the marchers, saying the fight would go on; "to the general election and beyond if necessary", as the Unison rep put it. She reminded the audience of the very welcome impending ballot of Unison NHS staff, which means they could be "out in September or October with the rest of us".

Firefighters' union general secretary Matt Wrack made a rousing speech in which he emphasised that "we should do this again, we should do this again soon". It is a testament to the firefighters though that they were on their 15th day of strike action in their pension dispute and "there is no mood for surrender", as Matt spelt out.

Strikers understood that more action will be necessary to defend living standards. There were huge cheers for PCS leader Mark Serwotka, the final speaker of the rally, who said: "Today has to be just the beginning."

Mark warned that there must be no repeat of the sell-out by right-wing trade union leaders of the huge pension strikes in 2011. "Every union here will have to meet together as a matter of urgency to make sure that the action gets bigger and bigger and bigger."

At some of the many strike rallies across the country, platform speakers made the call for a 24-hour general strike, which was music to the ears of the workers listening. The one million-plus workers on strike were losing a day's pay in order to fight a battle that must be won.

At the Durham Miners' Gala Steve Gillan, general secretary of the POA prison officers' union, raised the issue to enormous applause among the estimated over 100,000 trade unionists and working class people there, proof if it is needed that a call for such action from the TUC would be welcomed.

A 24-hour general strike has the potential to transform the situation, building workers' confidence in their ability to challenge low pay and austerity, showing the Con-Dems as weak, as they in fact are.

The working class, when organised and acting independently, is the biggest social force in society, capable not only of defending our pay and public services, but also of promoting a different type of society, one where the wealth is democratically planned to meet the needs of all not just the super-rich - a socialist society.

But the working class needs to increase its level of organisation both industrially - via building a fighting trade union movement - but also politically, by building a new mass party that represents the interests of our class instead of those of the 1%.

Unfortunately none of the platform speakers in London put forward any political alternative to Labour, that didn't support the strike action. Worse, a number of them fed illusions in Labour. This is quite incredible when the Labour leaders have made it absolutely clear that they will stick largely to the Tories' cuts agenda.

Clare Soloman from the People's Assembly gave a completely mixed message, by saying "no cuts" and no to "slower cuts", but preceded that with an appeal to people to go to their local People's Assembly gatherings "to join with people in the Green Party, the Labour Party" and trade unionists, etc. This is no way forward for all the striking local authority workers who work for the Labour-run councils that won't even meet the unions' modest pay requests. Nor for the Brighton workers suffering cuts at the hands of their Green-run council.

Many of the conversations with both strikers and private sector workers referred to the magnificent victory for workers in Seattle who recently won a $15 minimum wage. Seattle shows that workers can win. But it also shows the importance of the workers' movement building its own political voice.

The election of socialist Kshama Sawant gave the movement for $15 an uncompromising voice in the decision-making chamber to act on its demands. Seattle also shows that the pro-big business parties, be that the US Democrats or Britain's Labour, cannot be relied on to defend workers.

Workers must rely on their own strength - bringing that to bear through industrial action, by putting up worker and other anti-austerity candidates in elections to oppose all cuts, and by fighting for every improvement to the lives of the 99% and for socialism.

Reports from 10 July pickets and demonstrations