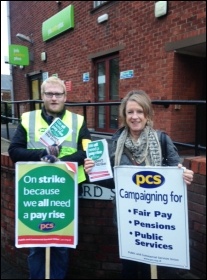 Civil servants in the PCS union are out on strike in force today, taking action as part of the rolling programme of strikes planned for this week that began with NHS workers on Monday. Early reports from the PCS indicate a great response from its members, for example:

“The contact centre at DVLA Swansea has been hit very hard – of 72 staff only 4 have gone in. 95% out at Brighton jobcentre. 90% turnout at Revenue and Customs Grayfield house – Edinburgh … and 75% turnout at HMRC Waterview Park in Washington”.

Civil servants across Lincolnshire are on strike today for 24 hours, as part of the PCS national action. Picket lines formed outside DWP offices including Lincoln Jobcentre and Lincoln Contact Centre. 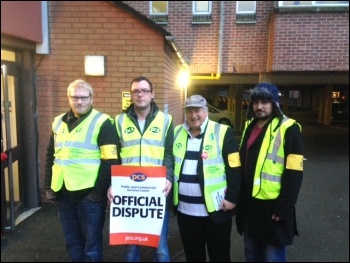 “Hundreds of civil servants across Lincolnshire are striking today because we all need a pay rise. PCS members working in the DWP have had seven consecutive years of real-terms pay cuts and we’re saying enough is enough.

“Public servants do vital work to help some of the most vulnerable people in society. But we won’t be made to pay for an economic crisis that we didn’t cause. If the economy is supposedly in recovery, working-class people deserve our fair share”. 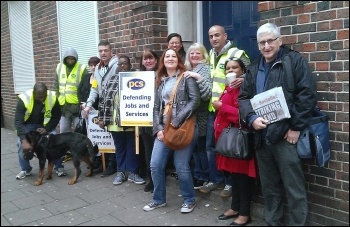 “We should be doing this together!” This was the answer from one of the group of all female pickets in Southampton this morning when the question was raised on where the campaign should go after today. All of the group told stories of the tactics of fear and intimidation used by the management within their workplace against workers and those workers involved in trade union activities.

Despite this, these brave women stood on the picket line with flags, handing out leaflets and joining forms for the PCS to staff going in to work. There was a defiant mood and a real support for the strike and the leaders of their union who they see as leading this fight.

One spoke about the need for all trade unions to have leaderships that are committed to fighting for their members, citing Mark Serwotka of the PCS and former RMT leader Bob Crow as what she saw as shining examples.

When discussion was raised about the political alternative that is needed there was wide agreement that the main parties do not represent us. The pickets showed an interest in the creation of a party committed to fighting austerity and standing candidates against all cuts.

They also were pleased to hear of the work of Southampton Councillors Against the Cuts, Keith Morrell and Don Thomas, who have persistently voted against all cuts the Labour council has imposed on the city and its workers. They were united in support for Keith and Don and spoke of a need for more like them! 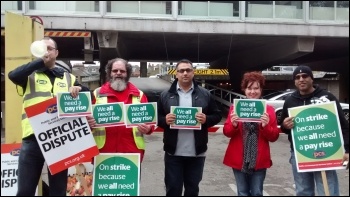 Forty people protested outside the opening of a Rembrandt exhibition today at London’s national gallery. 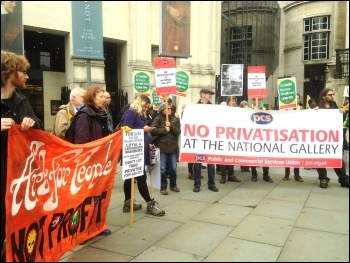 It was a marker point in the privatisation that PCS members have been campaigning against – the first exhibition fully staffed by private security.

Local arts campaigns, the regional PCS culture organiser and Youth Fight for Jobs spoke about the need to fight low pay, privatisation and zero-hours contracts. The action was part of the National PCS strike. 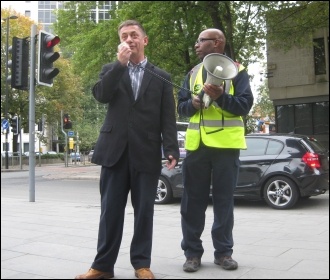 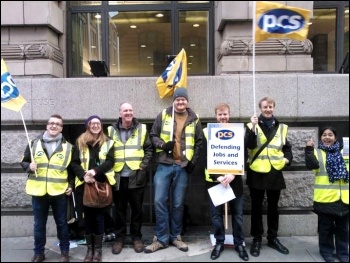 There’s something very stirring about visiting PCS picket lines in central London: all the imposing government buildings, parliament and even Downing Street are decorated with billowing yellow and blue flags and the hi-viz jackets and armbands of strikers.

As usual, workers were determined, though there was disappointment that the local government strike planned for 14 October had been cancelled.

Interesting discussions took place about political representation. While many strikers thought that they would probably vote Labour in the general election to try to get rid of the Tories, a lot had drawn the conclusion that Labour is a “dead duck”, in the words of one striker, and that a new workers’ party is needed.

One picket said: “Ukip’s vote is Labour’s fault. If there was a proper working class party, that would be getting those votes.”

Consequently there was a lot of interest in TUSC’s plans for the elections next year, and also in Seattle socialist councillor Kshama Sawant speaking at Socialism 2014 (see http://socialism2014.com/about/ ). 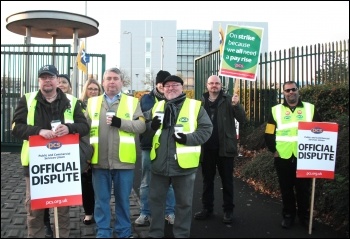 “Today’s strike is to try and get a decent pay rise for our members whose incomes have effectively been cut, through pay freezes and low pay awards.

“PCS estimates that members have had a 20% cut in real terms. We have the situation where members are using food banks and are unable to provide school uniforms for their kids.

“We are pleased with the response today in HMRC. This is the fourth strike in as many months, and PCS continues to call for united action across the private and public sector.

“The government are trying to grind down our members with their main aim being the privatisation of the civil service if they are re-elected next year.

“But the message from PCS is we will not go away. We will fight against unjust policies of this government.” 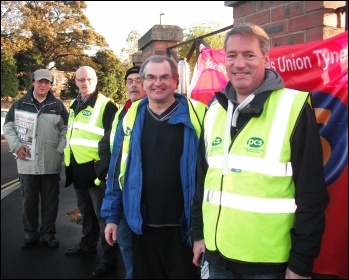 This version of this article was first posted on the Socialist Party website on 15 October 2014 and may vary slightly from the version subsequently printed in The Socialist.