Link to this page: https://www.socialistparty.org.uk/articles/19611 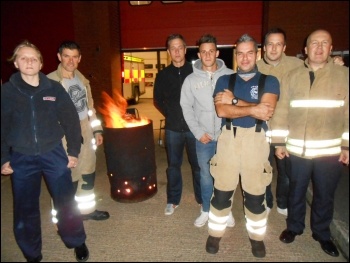 This week the FRS further threatened Buckinghamshire firefighters with the sack if they participated in the legal strike, which the FRS was informed of within the legal time frames. It claims that this is because it does not have an accurate list of union members. However, this is because it ended check-off as a method of collecting union subscriptions, as a way to attack the union.

The bullying tactics of the FRS has put pressure on local firefighters and the FBU to call off this period of strike action. Ricky has been sacked as a result of this.

However, the outpouring of anger of FBU members in Buckinghamshire and around the country (as well as many other trade unionists) shows that firefighters aren't cowed. FBU members locally will be working out the best way to respond to this blatant act of victimisation.

An immediate vote in favour of a strike ballot to defend Ricky would send a strong message of defiance to the FRS in Buckinghamshire and nationally. A national solidarity demo could be called during any local action.

Also, a protest outside the London office of fire minister Penny Mordaunt on the last day of this current strike would be a rallying point for Bucks firefighters as well as the national dispute.

The fantastic pension strike over the last few days should give FBU members confidence that the attack on pensions and the victimisation of Ricky Matthews can be defeated.

Pickets at Mansfield and Ashfield stations in Notts told Socialist Party member Jon Dale they were angry at being forced to strike again and felt the government seems to be trying to break the FBU.

Rob Hall and John Howard at Ashfield said: "This is a political dispute. It's a battle with the government. We're disappointed with the intransigence of the government but it only serves to strengthen our resolve.

"We're also disappointed with the media coverage, or lack of coverage. Firefighters appreciate the public support we've had. Through continued support we hope to influence the politicians".

Enthusiasm and determination was the message from members of the Fire Brigades Union. On Sunday I visited two picket lines in Huyton and Whiston to bring messages of support from the Socialist Party and from the Trade Unionist and Socialist Coalition (TUSC).

After a prolonged campaign to defend their hard-won pension rights the pickets were confident of victory.

Huyton's FBU rep Steve Taylor told me that the support from firefighters for the strike call was absolutely solid.

The response to the TUSC leaflets and the intention to challenge councillors and MPs who do not vote against cuts and austerity was received with enthusiasm.

Whiston's rep Kev Hughes' sentiments were similar, particularly regarding TUSC's decision to challenge the Labour Party's choice of candidate to fight the next election in Bootle, Peter Dowd, whose record of voting for cuts and attacks on the Merseyside Fire Service is atrocious. TUSC will be calling for donations to the FBU hardship fund and for FBU speakers to address labour movement meetings.

With the streets haunted by ghouls on Halloween night, firefighters across the country launched a four-day strike.

This at a time when there are many real monsters inhabiting parliament, whose coven of austerity means that they have refused to bring any new offer to the table over firefighters' pensions, despite two months of talks.

This is a government of tricks and no treats!

Here in Leicester, Eastern station watch manager said that on Saturday firefighters from across the city would be protesting by the Clock Tower in town; this being just one of many such defiant events which "will be mirrored and reflected across the country".

With regard to potential future action he added: "... personally I think that united strike action would be a good idea, as the government is letting a lot of the public sector down ... your emergency services, your NHS, your teachers, they're the people that we all need ... and certainly what the government is doing is demotivating them".

We joined the pickets at Odsal fire station as the local church clock struck 6pm on all hallows eve, with blue watch descending from the station and spirits running high!

Some amazing stories were being told, one female member of staff said that in South Yorkshire a new computer system from the French government was bought that not only still assigns crews in French but has, I kid you not, attempted to dispatch a 'pump' from central Sheffield to a fire at Disneyland, Paris. Now call me old fashioned, but this, along with the current dispute over pensions and the general anti-austerity campaign that the FBU are having to run cannot lead to good morale in a service full of brave people that run into buildings on fire while we actually run away!

The station that we were outside has been reduced from three pumps to now one. Indeed, the crews were saying that it is possibly under threat of closure in the near future under a restructuring programme. Well, we know what that means, more voluntary firefighters and less service, putting the public at extreme risk.

In light of this, we set off for the second picket of the night where we met 15-20 pickets at the Fairweather Green station; not fairweather pickets though! Again, the same stories of management intimidation, people being suspended and the possibility of job losses and certainly a reduction in living wages.

That aside, it was good to join these workers that we should have the utmost respect for and must continue to support in their struggle against the attacks that have been inflicted upon them. 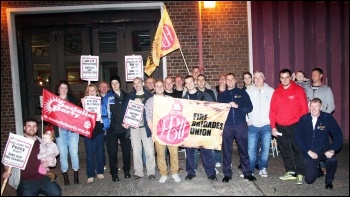 This version of this article was first posted on the Socialist Party website on 3 November 2014 and may vary slightly from the version subsequently printed in The Socialist.