Link to this page: https://www.socialistparty.org.uk/articles/19648 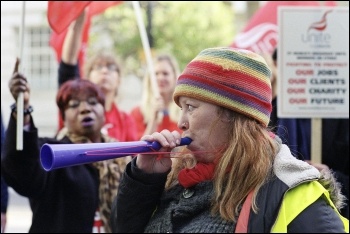 Workers at homelessness charity St Mungo's Broadway have won a fantastic victory against draconian attacks on their pay, conditions and union rights.

The Socialist spoke to the Unite union convenor at the charity, Adam Lambert, about the dispute.

What ignited the dispute?

Due to the union density within St Mungo's we've always had quite decent terms and conditions, and it's always been known as quite a quality provider of homeless services.

Recently we merged with another charity, Broadway, a much smaller charity in which terms and conditions of staff were much worse, a much lower quality provider which was also making a deficit for at least four years.

Despite all that, their leadership headed the new merged organisation. Clearly they had a plan to bust the union and reduce terms and conditions.

In July they invited Unite to a meeting and told us that from the next day they were making changes, including a 19% pay cut for frontline staff, taking pay out of collective bargaining, ignoring the union and our recognition agreement.

They changed HR policies and procedures from the next day as well, and said there would be a retrospective consultation.

They were changing everything and then asking us what we thought about it. We weren't prepared to accept that and we moved immediately to a mass campaign of industrial action. 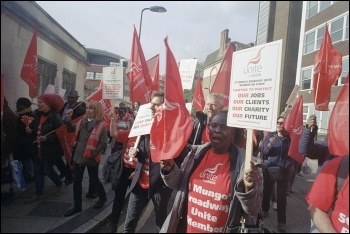 How was the strike organised?

They tried to throw so much at us and hoped we would take this retrospective consultation period seriously, going through the minutiae of every single change that they were making.

Everyone said enough is enough and we need to draw a line. We got a 68% turnout and a 96% yes vote which was fantastic.

So that resulted in a seven day strike?

After the ballot result, we called all our members for a mass meeting and hundreds attended. We proposed five days and talked about the need to do something that management wouldn't just ride out.

No one seemed to take a more conservative view and eventually some people started saying 'what about seven days?'. At the end of the meeting we unanimously voted for seven days. 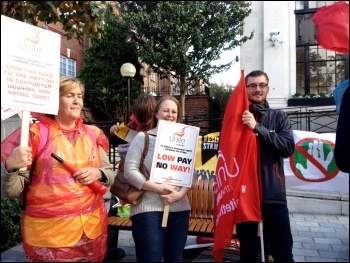 Then 19 workplaces were picketed?

Yes, it really was members who had never taken action before, who were not reps, just going out and doing what needed to be done and winning those arguments.

During the strike 70 people joined Unite. We've now got over 700 members. Our membership has grown massively, to include large numbers of Broadway staff. I think overall it's increased by 50% since July.

It was a great seven days because we didn't just picket, we protested everywhere and we really tried to build up political pressure.

We managed to get some councils beginning to ask serious questions and threatening their contracts with the company.

At the end of the seven days, people were disappointed that management hadn't yet moved, but I think were only strengthened in their resolve to take further action.

So we immediately called another action. We thought we'd got them on the ropes, we needed to move fast.

We proposed another ten days, and at another mass meeting about 130 members attended. It was a tense debate, and a serious debate, because people had lost a lot of money and we were asking them to step it up even further, but by the end of that meeting there were only two abstentions and everyone else voted to take ten days.

Eventually, the day before the strike, management finally agreed to go to ACAS. We went to ACAS, and by the evening it was quite clear that they were backing down on pretty much everything.

As the deputy convenor Jon said at the victory rally, we cannot trust them, if they renege, we need to come out again, and that got an absolutely massive cheer from our members. 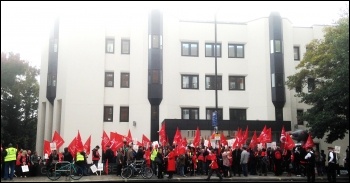 You're part of Unite LE1111 housing workers' branch. Can you tell us about the campaign to get standardised pay across the housing sector?

It's great to be part of a branch where so many shops have taken action - One Housing, Homes and Communities Agency, Equinox.

Look Ahead were about to strike but won before they actually struck. It's quite clear that there is a real appetite for resisting the atrocious cuts that we've seen within our sector.

They don't just impact on us as workers but impact on the services we can provide. So in the last year we've been developing sector standards within the branch, which is something that we want employers to sign up to.

In Scotland they have an agreement in place already, determining that the tendering situation is about competing over quality, not just competing over the amount you can slash wages.

I think employers should be worried because we will not sign up or agree to these attacks. If they continue in that spirit, there will be more unrest and more strikes.

This version of this article was first posted on the Socialist Party website on 10 November 2014 and may vary slightly from the version subsequently printed in The Socialist.