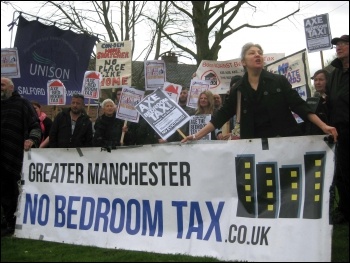 I have been hit twice with the bedroom tax. The first time was last year when I was in a three bedroom place, as I was having my younger kids stay weekends, along with my older son living with me full time.

Not being able to afford the top-up, I decided to move to a two bedroom flat along with my son.

Then he left and a few months ago I was back to square one, having to pay the top up once again. I could not afford this and gave the place up.

When I was in a three bedroom home the rent was about £82 a week. But when I moved to a two bedroom flat the rent was £125 a week.

Why did I have to downsize for the council to pay an extra £40?

It would have been cheaper for them to keep me in the three bedroom and still have my kids stopping.