But movement stronger than ever 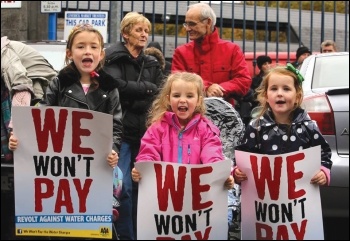 Ireland: We won't pay the water tax!   (Click to enlarge)

Following this the entire media, government and establishment went into overdrive. They cast the community, AAA, the Socialist Party, and Paul Murphy, as being a violent, anti-democratic mob.

This was a spontaneous mobilisation of hundreds of people in the community. When word spread that Joan Burton was in the area, it was inevitable that the raw anger and disgust people feel, particularly at Labour's sell-out, was going to be expressed.

The events are being consciously exaggerated. The Taoiseach (prime minister) Enda Kenny ridiculously said that in effect that Joan Burton had been kidnapped.

Paul Murphy has been accused of multiple crimes including, disgracefully, incitement to hatred and leading a mob. The reality is that Paul was one of the victims of a very heavy-handed approach by the police. There is video evidence that their actions caused him to be choked and to end up bare chested after his clothes were dragged off him.

The coverage of this protest and in particular the demonisation of Paul Murphy, the Socialist Party and AAA, has dominated the news since. We and the community of Jobstown have nothing to apologise for. It is not the working class fighting back that is the threat to democracy, but politicians and parties that break their promises when in power. If they think it's business as usual and that government politicians will be welcomed regardless of the policies they are implementing, they are making a bad mistake. 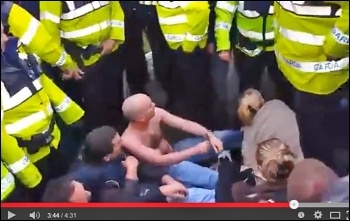 The equating, by a Fine Gael TD in the Dáil (parliament), of the protest in Jobstown and Paul Murphy's role to that of the Islamic State is disgusting. The idea has also been put that the people of Jobstown, the Socialist Party and other activists are part of a dangerous "sinister fringe".

But these attempts are failing. An online poll found 49% disagreed with the protest, 45% agreed and the rest didn't know.

Paul Murphy's strong defence of the community of Jobstown in the media, powerfully backed up by Socialist Party TDs Ruth Coppinger and Joe Higgins, has had an important impact in exposing the distortions. Paul has been warmly welcomed at meetings since the protest, including receiving spontaneous applause when entering the room.

Neither has the government had success with their attempt to make the water charges acceptable. They have made major cuts to the bills, delayed the start date, suspended metered bills, and are giving €100 back to people if they register with Irish Water.

But it is widely understood that the lower charge would be increased once accepted and so the campaign to completely scrap the charges must continue. Recent polls show anywhere from 60% to 82% planning not to pay.

There is a significant prospect that the water charges will be an intractable crisis for this government, and could even lead to its collapse. The activists who have emerged in this new sweeping movement should consider what they can do to ensure that people are given a real choice in the election, whenever it may be. We need a fighting, working class and genuinely left alternative.

If a slate or umbrella stood on the programme below, it could achieve a huge breakthrough:

On this basis a strong and principled working class left could emerge out of the next general election, not just as a force in the Dáil but as a real force in the communities and the workplaces. The political situation in the country could be completely changed. Such a force could put a real fight for genuine democratic socialist change on the agenda.