Editorial from the Socialist issue 837 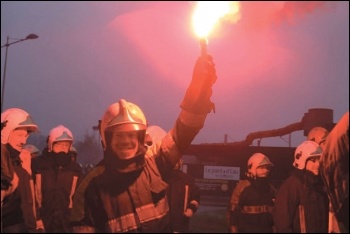 Once again workers are in revolt against "elderly and haggard" European capitalism - as the Pope accurately described it. Six years into 'the Great Recession' austerity and mass unemployment have become permanent continent wide.
Across the EU there are over eighteen million looking for work and unable to find it. Youth unemployment is a massive 23%, in Greece and Spain it is 50%.

In the first years of the crisis the working class came onto the streets in country after country in heroic struggle, attempting to defend working and living conditions. These movements were defeated not due to lack of determination but because their leaders failed them.
Workers lacked the democratic structures or mass working class organisations, both trade unions and mass workers' parties, to pressurise or remove and replace their existing leaders.

In the aftermath of this first round of the battle against austerity there was a pause in the struggle, as workers drew breath and assessed the situation. Inevitably, there was a feeling of demoralisation in some countries, even elements of despair, allowing reactionary and divisive ideas room to grow. However, that phase is now coming to an end. The hope that the crisis might be temporary is fading as Europe once again faces recession and - in several countries - workers have drawn the conclusion that the only way forward is to fight back.

Of course features of reaction remain to some extent in all countries, and not everywhere has yet been touched by the new upsurge of struggle. However, the mighty struggles sweeping Ireland and Belgium, the electoral uprising that took place in Scotland's Independence referendum, and the important political developments in Spain, are a portent of what is coming continent wide. All of them are examples of how fast events will develop once the enormous anger and frustration that exists below the surface of society finds a viable outlet.

In Belgium the capitalist class had not, up until now, dared to launch austerity on the scale of most other European countries, for fear of the response it would invoke from the working class. Now - belatedly - the new government is trying carry out Thatcherism on steroids. In response the trade union leaders began by calling a national demonstration - which was a huge 150,000 strong (in a country of 11 million) - the biggest demonstration since 1986. There have since been three regional 24 hour general strikes, which is culminating in a national 24-hour general strike on 15 December (see socialistworld.net for reports).

These have not been 'stay at home' general strikes. Mass workplace meetings to discuss the strike have been organised in many workplaces. Press reports said that in East Flanders alone there were 500 picket lines, involving 10,000 pickets.This is the first time in this historical era in Europe that general strike action has been called by the union leaders not just to 'let off steam' but with some intent to win, and even to bring down the government.

The magnificent response of the Belgian working class shows what is possible if the union leaders lift their little fingers. The mood of the strikers is one of determination to take the struggle to its conclusion. The trade union leaders - frightened by the power of the movement they have unleashed - may try and retreat, but this would not be easy. The sister party of the Socialist Party - Linkse Socialistiche Partij/Parti Socialiste de Lutte - is campaigning for a new round of action in the new year, culminating in a 48-hour general strike.

It is also sounding a warning that the fall of the government would not mean an end to austerity. The trade union leaders are hoping for a return to the tri-partite alliance government involving social democracy. Such a government, however, while it might cut more slowly, would carry out fundamentally the same policies as the current axe men and women. But they would be faced with an enormously emboldened and more confident working class that had seen off one government, and would not accept a diet of massive austerity from the next. The need for a new mass workers' party - to give political expression to the mighty movement of the Belgian working class, will be urgently posed.

Whereas in Belgium the trade union leaders have been forced to act, in Ireland - as in many countries - they have utterly failed to do so. But the magnificent movement against the water charges in Ireland shows the limits to how far the trade union leaders can act as a block on struggle. Faced with the iniquitous water charges Ireland has erupted in huge demonstrations. The capitalist media which previously sneered at the Irish people as 'sheeple' - as passive as sheep - are now decrying them as 'the mob' because they have dared to rise from their knees. 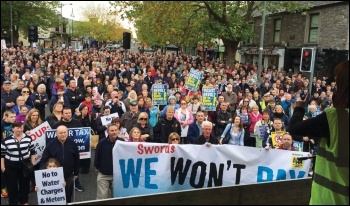 The Socialist Party - our sister organisation - including their three TDs (members of parliament), have made a clear call for mass non-payment of the tax. In opinion polls around 60% of the population have indicated they will not pay the tax. The government has already been shaken by the scale of the movement and has been forced to announce a reduction in the tax and a delay in its implementation.

This, however, can give confidence to the movement, showing complete victory is possible. In Ireland, as in Belgium, the question of a political alternative to austerity is posed. The government could fall at any time. The Socialist Party and the Anti-Austerity Alliance are calling for candidates to stand from the anti-water charges movement - standing not only for the scrapping of the water charges, but for a government that breaks with austerity and capitalism.

New movements are also developing in other countries. A general strike is taking place in Italy against the attacks being carried out by the Renzi government. Huge demonstrations have swept Hungary. A public sector strike is on the cards in Northern Ireland. At the same time - in almost every country - the capitalist parties are losing their ability to govern effectively on behalf of their class; because to act in the interests of capitalism is to be increasingly hated by the majority. The old channels through which politics flowed are being smashed up. This is the case in Britain - where the next government looks likely to be a fragile coalition of the 'slightly less unpopular'. Even 'stable' Sweden has seen its government collapse within three months of being elected.

As the existing capitalist parties' base of support crumbles there is a huge space for the development of new forces with an anti-austerity programme. In Greece, the left party Syriza is likely to win the next election, which could take place within weeks if the parliament fails to elect a new President. So desperate are the capitalist class to prevent this they have set up a fund to bribe Greek MPs to the tune of millions of euros in order to avoid a general election. This does not represent a fear of the leadership of Syriza, which has moved to the right and has attempted to promise Greek and global capitalism it is not a threat, but of the mighty movement it would invoke from the Greek working class as it attempted to take back what has been stolen from it over the last years.

In some other countries the absence of mass parties of the left has left a vacuum which far-right and right-wing populist forces have been able to partially fill in the electoral field. They have only been able to do so by - to one extent or another - adopting left 'anti-capitalist' rhetoric. It is not even completely ruled out in France that the leader of the far-right Marine Le Pen could win a future Presidential election. Were she to do so, or even appear poised to do so, this would lead to mass demonstrations and even strikes which would have some comparison to the huge movement of 1934 against fascism in France.

New movements of the left can also develop very quickly. Podemos in Spain did not exist a year ago and is now topping in opinion polls on 28%. We will see similar developments in other countries as the workers and young people fighting against austerity draw the conclusion that, if they are to win, they also need a political voice. A capitalist Europe's future is one of decline. The Euro crisis is not over, on the contrary, as national tensions increase it will explode again resulting, at a certain stage, in the fracturing of the Eurozone.

The working class of Europe entered the Great Recession unprepared for the all-out war that the ruling class waged on its living standards. Nonetheless, it fought back heroically. The lessons of those first battles are beginning to be digested, and is preparing the ground not only for the next round of struggle, but also for millions to begin to recognise that there is an alternative to capitalism - a democratic socialist federation of Europe.