From The Socialist newspaper, 7 January 2015

Scotland: more of the same after Labour leadership election

Jim Murphy's election as Labour's new Scottish leader has underlined the need for the affiliated trade unions to break from Labour and help build a new party to represent working class people.

Murphy, who has a long history in the right-wing, Blairite faction of the party and who was heavily promoted in the capitalist press, polled just over 55% of the vote. He won almost 70% support among Labour parliamentarians and 60% backing from party members.

In the late 1970s and early 1980s, when Labour was a workers' party at its base, many constituency Labour parties were strongholds for the left. Today, 30 constituency Labour Parties nominated Murphy as leader, as did the youth and student wing of the party. This is a crushing indication of how far to the right the Labour Party has moved.

A majority of trade unionists did back the left candidate, Neil Findlay. However, reflecting the lack of involvement by trade unionists in the party, it's estimated that fewer than 10% of eligible trade union members actually voted.

A former president of the National Union of Students, Murphy was instrumental in forcing through a change dropping NUS opposition to the abolition of the student grant. In 1997 the newly elected Blair government scrapped the grant alongside the introduction of tuition fees.

Murphy's election will cement Labour's position as a pro-big business, pro-austerity party. As such it will remain incapable of rebuilding its largely shattered base of support among the working class in Scotland.

A recent opinion poll put the Scottish National Party on 47%, fully 20% ahead of Labour. This would leave Labour with just seven seats in Scotland, a loss of 34 MPs.

Scottish TUSC commented following Murphy's election: "TUSC believes that Murphy's election will lead to an exodus of members from an already beleaguered party facing collapsing support after the independence referendum.

"It will also further weaken public support for the Labour Party in Scotland. Murphy is well known as an arch Blairite, a supporter of the Iraq war, an advocate of a new generation of Trident and backs further austerity cuts.

"As such, under his leadership, there is now clearly no possibility of Labour moving to the left and advocating fighting socialist and anti-austerity policies.

"We appeal to trade unionists and Labour Party members who see the need for a fighting anti-cuts and socialist alternative to join with TUSC and help us build that alternative." 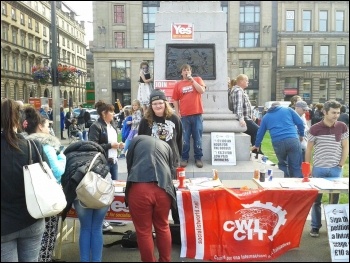 Bankers get bonuses... workers get the boot

Join the Socialists to fight for rent control