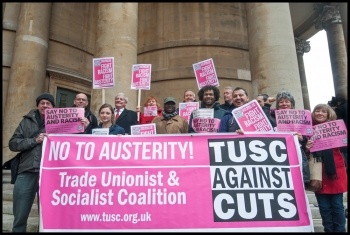 Black and Asian people are at the sharp end of austerity. There has been a 50% increase in long-term unemployment for young black people since 2010.

Only 4% of British Pakistanis say they are not worried about being harassed because of their race or religion. 65% of black Africans are worried about religious or racially motivated attacks.

Ukip is not alone in its divisive rhetoric. The Tories are notorious for their war on multi-culturalism. But we also see Labour running after them with their "tough new approach to immigration."

Traditionally, the majority of black, Asian and migrant communities have looked to Labour as their party. In the past Labour was - at least partly - a working class force for unity and against racism. But that is no longer the case.

How much longer will black and Asian people - or more recent migrant communities from Eastern Europe - look to Labour?

The reality is that Labour councils have passed on ferocious cuts, crying crocodile tears while working class communities pay a terrible price. In many instances the axe has fallen hardest on black and Asian people.

A new working class political voice is needed to unite us all against austerity and fight racism. That is why the Socialist Party takes part in the Trade Unionist and Socialist Coalition (www.tusc.org.uk).

We support campaigns in our communities on a whole range of issues. We also fight for the massive potential power of the trade unions to be used to the full, including coordinated strike action to oppose attacks on our living and working conditions.

A mass movement is needed to end austerity - no matter which party wins the general election. If you agree with what we say, join the socialists.

A sea of pink placards

That's part of what you saw as Socialist Party members joined a national march against racism on 21 March.

The pink signs and banners were held by TUSC supporters. Over 20 TUSC prospective parliamentary candidates marched - significantly more than any other political group. TUSC black and Asian prospective candidates and supporters were out in force.

About a dozen EDL supporters tried to hold a counter-protest at Piccadilly Circus. However, thousands of anti-racist marchers eclipsed the weak far right.

And the Socialist Party was the one group clearly explaining the link between capitalism, austerity and racism.