From The Socialist newspaper, 8 April 2015 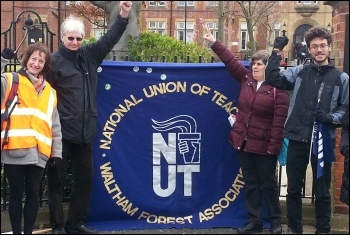 Delegates at the National Union of Teachers (NUT) conference in Harrogate over the Easter weekend have voted to ballot for strike action over 12% school funding cuts and workload if the next government doesn't tackle them.

The austerity plans of both Labour and the Tories would mean state schools in England losing over £1 billion a year - the equivalent of 20,000 teachers.

The conference followed a year of mixed results for the union. On the one hand delegates were rightly pleased their union had played a part in seeing off Michael Gove last year from his fiefdom in the Department of Education.

On the other hand the industrial action programme of the last two years had produced few tangible results, with Gove's successor Nicky Morgan making it clear the government's education policies would continue unaltered under her tenure.

On the key industrial debates a number of competing strategies between the leadership group on the executive and the rank and file group Local Associations National Action Campaign (Lanac) were hotly contested, often leading to close votes.

The issue of workload is becoming increasingly unbearable for many practising teachers. This is backed up by the recent shocking statistic that 40% of newly qualified teachers are leaving the profession every year!

The leadership grouping presented a strategy to conference that was long on aspiration but short of concrete strategy to combat increasing workloads and cuts.

An amendment from Lanac supporters sought to insert a clear timetable for industrial action if no movement was forthcoming from the next government over workload.

Moving the amendment, Socialist Party and NUT executive member Martin Powell-Davies from Lewisham Association warned that the union's industrial strategy had to change from one-day strikes with long intervals in between. He called for: "A clear plan of action. We must stick to it until we win."

Seconding the motion, NUT executive member Phil Clarke from Lewes warned: "Our members cannot go on like this. We are putting this amendment so our members have clarity [about how we intend to win]. The government will have clarity on what they need to concede if they want to avoid [industrial] action."

In previous arguments with Lanac, the right and 'left' wings of the leadership group have tended to share speaking time. Not so this time as 'left' members aligned to the Socialist Teachers Alliance, Alex Kenny and Andrew Baisley, lined up to oppose the amendment.

On a show of hands the vote was extremely close. A card vote was called with 41% of conference floor backing the amendment. This is a narrowing of the results of a card vote on a controversial industrial question at last year's conference.

This gap narrowed further when a Lanac amendment on fighting cuts to education funding, moved by Jane Nellist received the backing of 47% of conference delegates. But the vote means the leadership will delay the ballot until after the new government's autumn statement - despite the main parties' agreement over education cuts.

A Socialist Party fringe meeting on the anti-austerity movements in Greece, Spain and Ireland and their potential impact on Britain saw 25 people attend with £320 raised by the financial appeal.

A Trade Unionist and Socialist Coalition meeting on the Monday night saw over 60 attend, with 15 teacher delegates standing as TUSC candidates.

No end to austerity from 'The Magnificent Seven'

Will SNP deliver on "anti-austerity" promises?

Art review: Searching for the marvellous

Election hustings: we shall be heard!

EDL would be stopped again in Walthamstow